The Irish Times Business Person of the Month: Kevin Lagan

His newest venture FastHouse agrees deal for 200 homes in Dublin 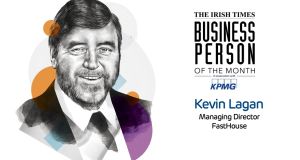 Belfast-born construction entrepreneur Kevin Lagan has been chosen as The Irish Times Business Person of the Month for June, an award run in association with KPMG.

Lagan’s newest venture, FastHouse, agreed a series of deals last month for more than 200 homes in Dublin, helping it build up a sales pipeline of more than €22 million. Founded in 2015, the company specialises in rapid-build homes and has been picking up speed with a series of high-profile projects.

It recently completed 466 holiday homes for the Center Parcs resort in Co Longford in just 34 weeks, with its factory producing five houses a day at that time. The Limavady-based company has also built holiday lodges for the Killyhevlin Lakeside Hotel in Enniskillen, Co Fermanagh.

A significant sales pipeline has prompted the company to invest in a fourth production line.

Lagan is also busy expanding his housebuilding business, which he retained following the sale of Lagan Group for €526 million in April 2018.

But it is FastHouse that is enjoying high profile success having recently won a series of new housing contracts. The company is currently installing some of its units, built offsite, in Dublin, Kildare, Cork and Offaly as well as on a number of sites in Britain and Northern Ireland.