Frontier Foods on track to almost double turnover this year, with further plans to expand 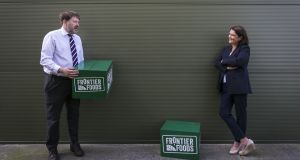 Food import and distribution company Frontier Foods will almost double its sales this year as the Covid-19 pandemic prompted more people to cook at home, the company said.

The business, which specialises in organic, ethnic, healthy and gluten-free products, has become the first AIB customer to receive a loan under the State-backed Credit Guarantee Scheme as it seeks to capitalise on its success during the pandemic.

Frontier Foods founder and chief executive Vincent Hughes told The Irish Times that the company posted turnover of €2.9 million last year and was now on track to reach €5 million this year.

The company has taken out a loan for the purpose of working capital to help the business grow.

The Credit Guarantee Scheme was established in response to the pandemic to encourage SMEs to take out additional working capital. The Government guarantee’s 80 per cent of the loan.

Frontier Foods has secured €100,000 on a 5½-year term with an interest rate of 2.75 per cent per annum, with the Government charging a participation fee as required under State aid rules.

Frontier Foods was established in 2008, and started with Mr Hughes and his then business partner selling Manuka honey out of a van. The company was among the first to import Manuka honey here. After its first year the company racked up retail sales of €1 million for its honey.

The business now has a range spanning 156 lines including Obento Japanese cuisine, Vego chocolate and its own brand products, including apple cider vinegar.

“All of what we do is either organic, authentic or vegan,” Mr Hughes said, adding that the company mainly services Tesco, Dunnes Stores and SuperValu.

While lockdown was a boon for the company, there were some challenges. Frontier imports from Sri Lanka, Thailand, China, Mexico and Canada, among other countries, and had to navigate country specific lockdowns on several occasions.

Over the coming five years, Mr Hughes intends to grow the business to about €10 million in turnover by expanding into other markets. The company already exports to Poland and Britain and has recently started selling with Musgrave in the North.

Cathy Bryce, AIB’s managing director of corporate, institutional and business banking, noted that the bank has €270 million in funding available under the State’s Credit Guarantee Scheme. The funds are available to small and medium business with up to 499 employees. The scheme is available on a first come, first served basis.