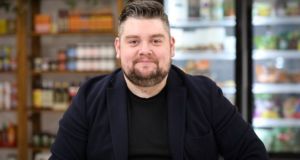 Strong Roots founder and chief executive Samuel Dennigan. “I started this company because I believe in farm to fork”

Fast-growing Irish food company Strong Roots has secured a listing for its products in more than 2,000 Walmart stores just over a year after it expanded in the US.

The company, which specialises in healthy frozen vegetable products such as kale-and-quinoa burgers, roasted beetroot wedges, spinach bites and sweet potato fries, is already listed in more than 8,000 stores globally, including all the major retailers in Ireland and Britain bar the German discounters.

Strong Roots, which was founded by Sam Dennigan (34) in Dublin in 2015, entered into the US market in May 2019 after agreeing deals with Target, Wegmans and Whole Foods to distribute its goods at more than 3,000 stores nationwide.

Walmart was up until last year the biggest retailer in the world, but was recently surpassed by Amazon. The company, which has more than 4,750 stores in the US and 11,500 globally, recorded revenues of $524 billion for the year ending January 31st.

“Walmart is the largest retailer in the country, and we’re incredibly proud to partner with this iconic American company to bring our range of plant-based food to families across the US,” said Mr Dennigan.

“I started this company because I believe in farm to fork. Consumers have embraced our products as they hunt for healthy, easy options in the freezer aisle and we’re thrilled to continue growing with this Walmart expansion,” he added.

Mr Dennigan is a former EY Entrepreneur of the Year finalist, and last year Strong Roots won the Local Enterprise of the Year award at The Irish Times Business Awards.

The businessman, who relocated to Brooklyn in New York last year to oversee the company’s US launch, is targeting revenues of €100 million by 2023 for Strong Roots, with much of that expected to come from North America.

The US market for plant-based food hit $5 billion last year, and is growing at five times the rate of total food sales.

It has also made a number of significant hires at boardroom level, including appointing Karen Griffin, who has extensive managerial experience at companies such as DHL, Coca-Cola and KPMG, as its chief financial officer.

The company has sold more than 8 million products globally. Outside of its main markets its products are also available in Singapore, Iceland, the United Arab Emirates, Bahrain and Qatar.