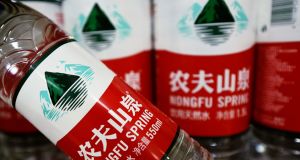 The founder of China’s biggest bottled water group has become the country’s third-richest person with a fortune of more than $50 billion (€42 billion), after shares in his company surged on their debut in Hong Kong.

At one point on Tuesday Mr Zhong’s fortune surpassed the $51.3 billion net worth of Pony Ma, the founder of Chinese internet group Tencent and China’s second-richest man, according to Bloomberg estimates. Jack Ma, the founder of ecommerce business Alibaba, remains China’s wealthiest individual with an estimated $57.8 billion fortune.

Nongfu, whose red-capped plastic bottles are ubiquitous at official gatherings in China, raised more than $1 billion in its Hong Kong initial public offering this week.

The pop in Nongfu’s stock pushed the value of Mr Zhong’s 84 per cent stake in the company to $40.3 billion, according to Bloomberg estimates. Combined with his $9.4 billion stake in Beijing Wantai Biological Pharmacy Enterprise, a maker of Covid-19 test kits, and cash and other assets of $1 billion, Mr Zhong is now worth $51 billion on paper.

The IPO nearly trebled the net worth of Mr Zhong, a former mushroom grower and journalist who founded Nongfu in 1996. Before the Hong Kong offering, his fortune stood at $18.9 billion.

Mr Zhong is known in Chinese business circles as the “Lone Wolf” due to his distinctive personality. “I am a man on my own,” he once told local media. “I don’t care about what my peers are doing and thinking.”

He dropped out of school at age 12 after his parents were targeted during the Cultural Revolution. After a spell as a reporter, he went into business in the early 1990s selling pills used in China to treat erectile dysfunction. As the efficacy of Mr Zhong’s treatments – which were derived from turtle parts – came under regulatory scrutiny, he shifted to bottled water.

His wealth has surged more than 670 per cent since the start of this year. Part of that windfall was derived from his holding in Wantai Biological, whose shares are up more than 2,000 per cent since it listed in Shanghai in April. Mr Zhong now ranks 22nd on Bloomberg’s global rich list, just above the Mexican telecoms mogul Carlos Slim.

Research cited in Nongfu’s IPO prospectus showed that retail sales in China’s bottled water market rose to Rmb201.7 billion (€25 billion) in 2019, with Nongfu enjoying a 20 per market share – the largest of any company. The market is expected to grow at an average annual rate of more than 10 per cent between now and 2024, according to research firm Frost & Sullivan.

Nongfu reported net profit of Rmb5 billion in 2019 on revenue of Rmb24 billion, according to the prospectus. Its market capitalisation of about €40 billion is higher than US drinks group Constellation Brands but lower than the UK’s Diageo.

Traders and brokers said retail demand for the offering pointed to huge demand for listings of Chinese companies.

Businesses from the world’s second-biggest economy have raised billions of dollars in Hong Kong this year against a backdrop of rising tensions between Beijing and Washington.

The Trump administration has proposed forcing Chinese companies to delist from New York exchanges if US regulators are not given access to audit reports.

Ant Group, the Alibaba-backed Chinese payments business, is expected to sell up to $30 billion worth of shares in Hong Kong and Shanghai this year in what could be the world’s largest IPO.

Hong Kong’s Hang Seng index was up 0.7 per cent on Tuesday. – Copyright The Financial Times Limited 2020