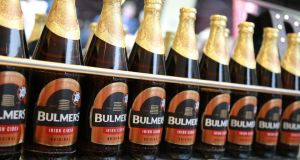 Bulmers maker C&C reported revenue in Ireland was down 3.1 per cent to €120.6 million. Photograph: Nick Bradshaw

Revenue and profit at drinks company C&C rose in the first half of its financial year, but Irish revenue fell as the weather hit the off-trade.

The drinks group, which makes Bulmers cider, said it had free cash flow of €80.6 million. It said the interim dividend would be 5.50 cent, an increase of 3.2 per cent.

Revenue in Ireland was down 3.1 per cent to €120.6 million. Operating profit was 1.1 per cent lower at €25.9 million, with the decline mainly seen in the off-trade.

“Last year was exceptional with a World Cup and a hot summer boosting demand. Despite challenging year-on-year comparatives we have delivered a resilient revenue performance in our core brands,” said Stephen Glancey, C&C group CEO.

“Despite the economic uncertainties linked to macro and political issues, current trading is in line with expectations. Accordingly, we remain on track to deliver double-digit EPS growth in FY2020 and on our steady state forward earnings targets.”

Mr Glancey said the group had invested €3.5 million in a range of projects, and had bought back three million shares.

“Since its acquisition of Matthew Clark Bibendum in April 2018, C&C has made significant progress in stabilising operations,” Davy analysts Cathal Kenny and Roland French said in a note to clients. “The next phase will be about yield enhancement.”

This was the first time set of results the company has reported since it began trading on the Ftse.

C&C shares ceased to trade in Dublin earlier this month, with the drinks company transferring its main stock exchange listing to London. The decision reflects the fact that most of its revenue is now generated in the UK.