Milano profits up 29% as restaurant chain continues to expand 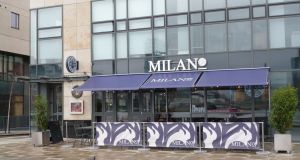 The opening of a new Milano restaurant last year, bringing the number to 19, contributed to the increase in profits.

Pretax profits at the company that operates the Milano chain of restaurants in Ireland last year increased by 29 per cent to €6 million.

New accounts filed by Agenbite Ltd show that the business recorded the surge in profits as revenues increased on a like-for-like basis by 2.7 per cent to €25.27 million.

The opening of a new Milano restaurant last year, bringing the number to 19, contributed to the increase in profits.

According to the directors’ report “while the rate of revenue growth is lower than in the previous period, the performance is considered to be encouraging given the continuation of challenging market conditions”.

The firm’s pretax profits were boosted by a €600,000 exceptional gain relating to the reversal of a 2017 impairment of the same amount.

The Bejing-headquartered Hony Capital owns Pizza Express and is evaluating options on how to deal with Pizza Express’s onerous £1.1 billion debt. Pizza Express earlier this week said, “95 per cent of our UK & Ireland restaurants are profitable and there are no plans for closures outside the normal course of business.”

On the company’s future developments, the directors said the company will continue with its strategy of growth through both existing restaurants and opening of new restaurants.