Despite it dominating politics for three years, for voters it has become yesterday’s news 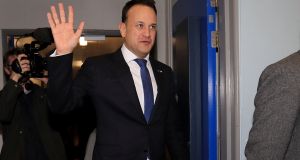 The B-word barely figured as an election issue, despite Fine Gael’s best efforts during the campaign to make Brexit a critical talking point for voters.

Despite Brexit dominating Irish and British politics for the past three years, the UK’s departure from the EU – and the potential risks of a no-deal crash-out (still) at the end of the year – came joint last along with immigration on a list of 10 issues cited by voters in Saturday night’s exit poll.

The Ipsos/MRBI poll commissioned by The Irish Times, RTÉ, TG4 and UCD showed that among a base of 1,000 voters, just 1 per cent said Brexit would decide how they were going to vote. This compared with 32 per cent for health, 26 per cent for housing and 8 per cent for pension age.

Fine Gael’s full-court press against Fianna Fáil began early in the campaign, with Taoiseach Leo Varadkar attempting to paint his then main rivals as a party that “can’t be trusted” on the issue of Brexit when the process was only “at half-time”, with a critical EU-UK trade deal still to negotiate.

But the talk about Fianna Fáil being the “junior B team” failed to hit home with voters on the issue. Fianna Fáil leader Micheál Martin dismissed the attacks, stating that he had supported Fine Gael’s stance on Brexit and the parties maintained “a good national consensus” on the issue.

“There is a lot of goodwill and thanks on the doorsteps for Brexit, but voters have priced it in as yesterday’s news,” said one Fine Gael insider. He regretted that, to set it apart, Fine Gael did not tell the electorate more during the campaign about the Government’s backroom diplomatic dealings at critical junctures in the Brexit process – for example, the Varadkar-Boris Johnson meeting on the Wirral that broke the Brexit deadlock in October or the times when EU solidarity behind Ireland and the Border waned in recent years.

Any attempt to make Brexit more of an issue during the campaign by calling an election for a week after the UK’s scheduled exit from EU on January 31st – even though Fine Gael dismissed this - was hampered by the fact that the departure ended up being a non-event for Irish voters.

The risk of a hard border on the island of Ireland faded, with the Brexit deal putting a trade border between Northern Ireland and Britain in the Irish Sea. When it formally happened, the UK exited with a whimper.

“It is a measure of the fact that January 31st went off without a single piece of friction that the voters don’t care about it,” said the Fine Gael source.

The standstill transition period, postponing any Brexit effect on Irish businesses until the end of December 2020, means that the full impact of the UK’s departure has not yet been felt at home.

'They could hardly go with health, housing or the pension age with people lying on trolleys'

“People have put it to the back of their minds until the end of the year, to the date when it kicks in. It is the only explanation why it has not been an issue because everyone was very concerned,” said Imelda Munster, the Sinn Féin TD re-elected in Co Louth.

Munster said the seriousness of the country’s health and housing crises overtook Brexit as an election issue.

“It was the only thing they could go with,” she said of Fine Gael pushing Brexit as a concern during the campaign.

“They could hardly go with health, housing or the pension age with people lying on trolleys. It was the only positive thing that they thought would work for them.”

Damian McGenity, a south Armagh farmer and spokesman for Border Communities Against Brexit, said the increase in Sinn Féin’s vote in the Border counties was a sign that Brexit was “definitely a factor” in those parts.

It was “not a big issue to people south of the Boyne”, he said.

“Eaten bread is soon forgotten. The withdrawal agreement has, for now, achieved a deal, but it is yesterday’s news; the future is what people see as critical,” he said.

Hitman to be sentenced for shooting drug cartel target next month 17:42
Shoppers spent more on Christmas 2020 than in previous year 17:36
Covid-19: Passengers may be required to pay for stay in quarantine 16:58
Coursing may not resume during Level 5 Covid-19 restrictions, judge rules 16:49
Man to be tried over threats to family of murdered Cameron Blair 16:44