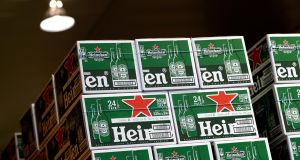 Heineken forecast lower barley and aluminium costs would help to boost profits this year, when its long-serving chief executive will step down. Photograph: Issei Kato/Reuters

Heineken, the world’s second largest brewer, forecast lower barley and aluminium costs would help to boost profits this year, when its long-serving chief executive will step down.

Shares in the maker of Heineken, Europe’s top-selling lager, as well as Tiger, Sol and Strongbow cider, jumped more than 6 per cent in early Wednesday trading as investors cheered solid fourth-quarter results, led by growth in Vietnam, Cambodia and Brazil.

The company said revenues should rise this year on higher volumes, prices and consumers shifting to more expensive beers.

Along with a more moderate increase in input costs, that should result in a mid-single digit percentage rise in operating profit in 2020, it added, while saying it was too early to assess the impact of the coronavirus outbreak on its business.

“We are cautious, we are just looking at the situation, but for sure it is not paralysing, that would be too big a word, but it will have some consequences,” departing chief executive Jean-Francois van Boxmeer said on a conference call.

Mr van Boxmeer, who is a Belgian, has been CEO since 2005 and has spent 35 years with the company. He is set to step down on June 1st, a year earlier than expected. He will be succeeded by the company’s Asian chief, Dutchman Dolf van den Brink, Heineken said late Tuesday.

Analysts said the move was not a major surprise and Mr Van den Brink, who has also headed Heineken’s US and Mexican operations, was a logical choice.

Heineken said beer volumes grew by 4.1 per cent in the fourth quarter, with the strongest increases in Vietnam, Cambodia and Brazil.