Why does Ireland import 44,000 tonnes of British potatoes each year? 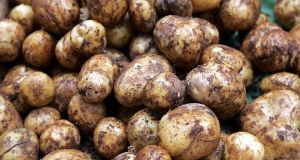 How did a country so synonymous with the potato become a net importer of the vegetable? According to official trade stats, we imported 72,000 tonnes of spuds last year. That equates to roughly 400 million individual tubers or 85 per person. Nearly two thirds (44,000) were imported from Britain, ironic given its role in the Great Famine, while a further 10 per cent come from Northern Ireland. At the same time we exported just 3,000 tonnes last year, worth a measly €1.7 million, and mainly to Britain and Northern Ireland.

Even the Mexicans are baulking at the idea of having to import their national staple, avocados, but as the world’s largest producer and with world demand the way it is, the average Mexican is being priced out of the market.For more

The same can’t be said of potatoes, with demand and price relatively unchanged from a decade ago. Until quite recently Irish people ate spuds by the bag load but their position in the Irish food pyramid has been gradually eroded by the arrival of pasta and rice.

The globalisation of the dinner plate has seen our average annual consumption of potatoes drop from 140kg a person in the 1990s to 85kg nowadays. This is still 2½ times the world average, but less than where it was.

As recently as the 1980s, pasta was still a minority sport for many Irish households – back then the market was dominated by such exotic products as Heinz Spaghetti Hoops, which didn’t come al dente . Irish kids nowadays probably consume as much pasta as potatoes, the dietary implications of which are unclear.