The nightmare Brexit scenario and Ireland

Are we underestimating the likely impact? 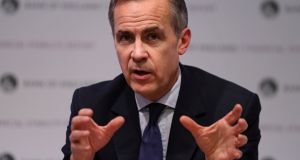 The current rule of thumb is that if UK gross domestic product (GDP) falls by 1 per cent, Irish GDP contracts by between 0.3 and 0.8 of a percentage point. It’s not the same as saying that, when the UK sneezes, we catch a cold. Those days may be behind us but the ripple effect is significant.

This is hardly surprising with some 13 per cent of Irish exports going to the UK and 40 per cent in the employment-intensive food sector.

Hence the Bank of England’s nightmare Brexit scenario, which suggests the UK economy could witness an 8 per cent decline in GDP combined with a 20 per cent collapse in the value of sterling if it crashes out of the bloc without a deal, must have sent shudders through the Department of Finance here. In theory this could cause a corresponding 2.4-6.4 per cent drop in Irish GDP, far worse than previously thought.

The Central Bank estimates that a no-deal or disorderly Brexit could see output here fall by 2.7 per cent, costing up to 40,000 jobs, over five years.

But the Bank of England’s worst-case scenario, which assumes everything that can go wrong goes wrong – from goods being stuck in Calais to a speculative run on the pound – suggests the impact here could be far worse.

While the Bank of England scenario plays out over five years, most of the economic shock comes in the first one.

Exporters here would be hit very hard by the predicted collapse in the value of sterling, while the food sector would also be particularly exposed to tariffs on products such as beef and dairy.