Convenience food group reports 13 per cent increase in profit before tax to £17.8 million 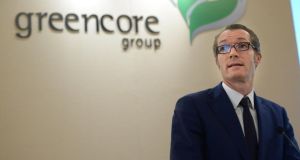 Greencore has altered how it plans to disburse £509 million (€570.6 billion) of capital from the sale of its US business amid an outcry from shareholders.

The convenience food group had originally intended to return the proceeds to investors by way of a special dividend.

However, at an extraordinary general meeting in Dublin last month several shareholders voiced concern about the tax implications of the proposed scheme.

In its latest full-year results, the first since its exit from the US market, the company said the capital return would now proceed by way of a tender offer to all shareholders.

So instead of receiving a special dividend of 72p per share, which would incur an income tax liability, shareholders will have the option of selling their shares up to a value of £509 million.

The capital will still be returned, but sharheolders will now have a choice of whether or not to participate, chief executive Patrick Coveney said.

Greencore surprised the market in September by announcing the sell-off its US business to Hearthside Foods for $1.075 billion (€935 million), effectively ending its foray into the US market.

“We took the decision to sell our US business having received a compelling offer for it,” Mr Coveney said after the trimmed-down company reported a 13 per cent increase in profit before tax to £17.8 million (€20 million) and a 4.2 per cent rise in revenue to £1.5 billion (€1.68 billion).

“We will now focus all of our attention and resources on the significant growth opportunities that we see in the UK, both organic and inorganic,” Mr Coveney said.

“Despite the short-term uncertainties of Brexit, our scale, depth and expertise in attractive and structurally-growing food categories mean that we are confident in the future growth prospects for Greencore,” he added.

Mr Coveney later told The Irish Times that the business had seen a slight downturn in volumes because of Brexit, mainly in its ready-meals division, which he linked to a Brexit-related weakness in consumer spending.

However, he said the company’s main food-to-go division, which covers its main sandwich, salad and sushi business, was still performing strongly on foot of an expansion in smaller retail multiples.

Greencore is responsible for three out of every five sandwiches sold in the UK.

Mr Coveney said the company was continuing to contingency plan for a hard Brexit, but expressed hoped that the London parliament may prevent such a scenario.

He said the company sourced about 20 per cent of inputs from ingredients to packaging outside the UK but sold exclusively inside the UK, leaving it more insulated from Brexit than others.

Greencore’s board is recommending a final dividend of 3.37 pence per share.

It said this would result in a total dividend for the year of 5.57 pence per share, up from 5.47 pence per share last year. Its adjusted earnings per share for the full year came in at 15.1 pence, in line with its guidance of 14.7 to 15.7 pence and down slightly on last year.

“The key focus is the outturn of the UK division, in which adjuasted operating profit [pre-reallocated central costs] came in at £110.6 million, 2 per cent below our forecast,” said Davy analyst Jason Molins.

Greencore shares closed the day down 3 per cent at £1.77.