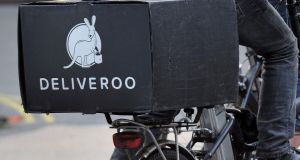 The ruling “emphatically upholds the finding of the CAC that Deliveroo riders are fully self-employed for the purposes of employment law,” Deliveroo’s lawyer said in a statement. Photograph: Nick Ansell/PA Wire

A trade union lost a UK court bid for the right to lobby Deliveroo over pay and conditions on behalf of the food-delivery service’s riders, in a rare setback for workers in the so-called gig economy.

The Independent Workers Union of Great Britain (IWGB) failed on Wednesday at the High Court in its bid for permission to lobby on behalf of Deliveroo riders in north London, over pay, hours and holidays. The union will appeal, it said in a statement.

British courts have previously found in favour of employment rights for those in the gig economy. The UK’s top court ruled in June that Pimlico Plumbers Ltd should have treated a tradesman as a worker, giving him the right to vacation pay and to sue the company. In May, the UK car service Addison Lee lost an appeal in a case over drivers’ rights, and in 2017 a London employment tribunal found a cycle courier working for CitySprint UK was a worker.

The “judgment is a terrible one, not just in terms of what it means for low-paid Deliveroo riders, but also in terms of understanding the European Convention on Human Rights,” Jason Moyer-Lee, general secretary of the IWGB, said in a statement.

Wednesday’s decision at the High Court comes from an appeal of a November 2017 ruling by the Central Arbitration Committee, the UK body that oversees trade union recognition. The panel found that the riders couldn’t be recognised for collective bargaining because they weren’t classed as “workers”. The union is trying to overturn that decision.

Because Deliveroo is genuinely willing to let riders pass jobs to other people to do on their behalf, the riders can’t be classed as workers, the CAC found in its 2017 decision. The union said not allowing collective bargaining breached riders’ human rights.

The ruling “emphatically upholds the finding of the CAC that Deliveroo riders are fully self-employed for the purposes of employment law”, Deliveroo’s lawyer Colin Leckey said in a statement.

It’s the first case he’s aware of that’s looked at whether a group of gig economy workers are in an “employment relationship” under European rules on the right to freedom of assembly and association, he said.

It comes as Uber fights a separate London lawsuit about whether its drivers are self-employed.