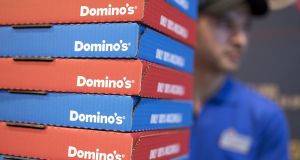 Domino’s market has been made increasingly competitive by the growth of delivery platforms such as Uber Eats and Deliveroo. Photograph: Jason Alden/Bloomberg

Domino’s, the pizza delivery chain, is looking to customer collection to boost sales after its growth slowed significantly last year.

The company, which is a franchisee of the US Domino’s, said that in-store collection was an “important growth area” as it required little additional labour cost, therefore making a significant difference to the profitability of a store.

Despite like-for-like sales growth of 1.9 per cent in the UK, including “split stores” where one area is covered by two shops, in the year to the end of December the number of orders decreased 1.8 per cent and the items per order fell 1.6 per cent.

By contrast, the total number of orders collected by customers increased 5.3 per cent.

Prices were up 2.6 per cent on a like-for-like basis, although Domino’s said that the proportion of orders sold on discount was 90 per cent. Overall sales increased 4.8 per cent to £1.2billion (€1.38bn).

Domino’s is emerging from a turbulent year in which it announced it planned to sell or offload its European businesses to focus on growth in the UK, where the market has been made increasingly competitive by the growth of delivery platforms such as Uber Eats and Deliveroo. It has been hampered by a dispute with its 70 franchisees over the amount of profits they receive.

“The external environment hasn’t been easy and, whilst parts of the UK and Ireland may become less cautious having formally left the EU, much remains uncertain as we go through the transition year,” he said, adding that the company was monitoring the potential impact of coronavirus and had contingency plans in place. – Copyright The Financial Times Limited 2020