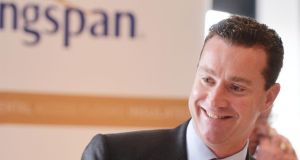 Kingspan chief executive Gene Murtagh: his €5.37 million haul from the sale of 83,251 shares was virtually all profit. Photograph: Alan Betson

Top executives at insulation giant Kingspan and sandwich maker Greencore raised €10.8 million between them selling shares in their companies late last week, it has emerged.

Kingspan chief executive Gene Murtagh and his chief financial officer, Geoff Doherty, took advantage of the company’s stock reaching an all-time high on Friday to dispose of €8.57 million of shares between them at prices between €63.85 and €64.55 each, the company said in stock exchange filings on Monday.

Mr Murtagh’s €5.37 million haul from the sale of 83,251 shares was virtually all profit, as they resulted from the exercise of share purchase options under the company’s 2008 executive performance share plan and priced at an exercise price of 13 cent each.

The businessman, son of Kingspan co-founder Eugene Murtagh, retains about 1.13 million shares in the company, valued at about €70 million.

It has delivered a total return for shareholders, including stock gains and dividends, of 1,121 per cent in the past decade, according to Bloomberg data.

Mr Murtagh said that the Kingscourt, Co Cavan-based company has a war chest of €750 million to spend on acquisitions and that it is currently eyeing several targets, which he declined to identify.

Greencore shares have advanced 19 per cent in the past year, after the group sold its former US division and bought back £509 million of shares with some of the proceeds.

Greencore operates in both the Irish and UK markets but does most of its business in the UK where it supplies grocers and other retailers, as well as all of the major supermarkets. It manufactures about 717 million sandwiches every year.

The company saw a third of shareholders vote at its latest annual general meeting in January against the company’s remuneration plan, which included pension contributions of 35 per cent of Mr Coveney’s salary.