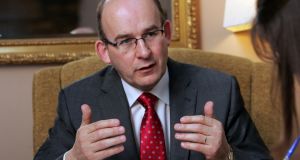 Dairygold, the State’s largest farmer-owned dairy co-op, said the coronavirus crisis had triggered a major fall-off in global dairy demand and a near 20 per cent collapse in prices for skim milk powder, one of the Republic’s main dairy exports.

Chief executive Jim Woulfe said lockdown measures across Asia and Europe had shut much of the food service industry, resulting in weaker demand.

“The food service market has fallen off a cliff,” he said, noting the price of skim milk powder had dropped by €500-€600 per tonne or roughly 20 per cent.

He also noted that the current stay-at-home measures “had changed the dynamic” in favour of less perishable foods. Nonetheless he was hopeful the industry could bounce back quickly if the outbreak was contained.

Mr Woulfe was speaking as Dairygold reported a record turnover of €1.02 billion for last year, an increase of €27.5 million (2.7 per cent ) on the previous year. The Cork-based food group also reported a 24 per cent increase in operating profit to €35.8 million.

Dairygold expanded its milk production to a record 1.39 billion litres in 2019. This represents a 65 per cent increase since the abolition of European Union dairy quotas in 2014.

“Over the 10 years since 2009, €425 million has been invested by Dairygold and its partners across our four processing sites,” Mr Woulfe said.

This has delivered three new milk powder factories, a new cheese factory in Mogeely and an enhanced cheddar factory in Mitchelstown, along with a complete regeneration of whey processing,” he said.

As a result, the group is more exposed to the outcome of the Brexit negotiations.

“Brexit remains a business concern. As the transition period progresses and the negotiations on the future trading relationship continue, it is critical that the future trade agreement is as close to the existing trading arrangements as possible,” it said.