Kerry pressing ahead with agm next month despite Covid-19 crisis

Pay package of chief executive increased last year to just under €4 million, a rise of 55% 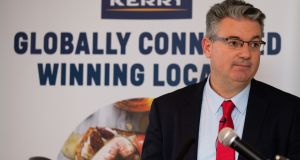 Irish food ingredients giant Kerry Group is pressing ahead with its annual general meeting of shareholders next month, despite the Covid-19 crisis.

Kerry has sent shareholders a copy of its annual report and a notice of its agm, which it plans to hold on April 30th in the Brandon hotel in Tralee. The letter to shareholders also includes a separate advisory note about the holding of the agm against the backdrop of health risks from Covid-19. It promises that the room will be “vacated promptly” after the meeting.

Although the letter was only sent out on Monday, it is dated March 19th, before the State went into full lockdown with public gatherings effectively banned.

As one of the biggest Irish listed companies, Kerry’s agm would normally be attended by a couple of hundred people, while the Brandon’s main hall has a capacity for 1,000 people. The hotel is currently closed.

Under the restrictions that are currently in force until Easter Sunday, April 12th, it would not be possible for the agm to go ahead, if those restrictions are extended until the end of the month.

A Kerry spokesman said the holding of the agm is “is under constant review and the company will follow all relevant Government advice and guidelines”.

As corporate Ireland enters agm season, AIB has said its annual meeting will be held on April 29th via conference call from its headquarters. Smurfit Kappa, meanwhile, has switched its agm from a hotel to the company’s offices.

Under company law, each entity must hold an agm once a year and there cannot be more than 15 months between the holding of such meetings.

Kerry also released its annual report on Monday. It showed that the pay package of chief executive Edmond Scanlon increased last year to just under €4 million, a rise of 55 per cent.

Last month, Mr Scanlon was also awarded a 2.5 per cent increase in his basic pay for the coming year to almost €1.2 million, while chief financial officer Marguerite Larkin received a similar rise to €735,000 for her basic salary.