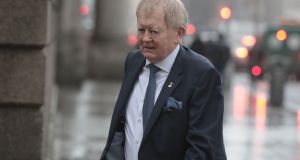 Charlie Chawke: “No one has ever seen anything like this, it is crazy.”

The “big danger” for the pub industry when pubs eventually reopen is that people will have got too used to drinking at home and won’t return to pubs in their previous numbers, according to well known publican Charlie Chawke.

He said that this year will be “a disaster” for the industry.

The Chawke pub group, which employs 400 people and enjoyed revenues of around €30 million last year, comprises of nine pubs – including the country’s most expensive, The Old Orchard in Rathfarnham. All have been shut down due to the coronavirus.

His comments come as latest accounts filed for College Inns Ltd, which operates Bank pub on Dublin’s College Green, show that accumulated profits increased by €232,153 to €2.38 million in the 12 months to the end of April last.

Mr Chawke, who turned 70 last year and is currently abiding by Government restrictions for the over-70s to ‘cocoon’ in their own home, said: “I’m locked up here myself. More or less since the start. My children insisted that I stay indoors. They come out and wave in the window but they can’t do that now but we FaceTime each other.

“No one has ever seen anything like this, it is crazy.”