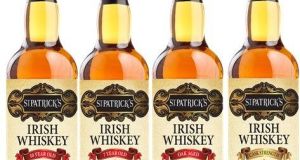 A prominent Cork whiskey brand has dropped the word “distillery” from its label on foot of complaints that its use was deliberately misleading and damaging to the industry’s reputation abroad.

The Food Safety Authority of Ireland (FSAI) is known to have received a number of complaints about the mislabelling of whiskey products here, including at least one against St Patrick’s Distillery Limited.

The company has now seemingly bowed to pressure and changed its label to simply “St Patrick’s”.

General manager Cyril Walsh acknowledged the company had recently dropped the word “distillery” from its label but insisted it had never made a secret of the fact that it buys in “new-make” whiskey from elsewhere.

“We don’t believe we were misleading anybody,” he said. “We’ve been open and honest about the fact that we buy in whiskey from a number of other Irish distillers and we’ve made that public knowledge in all our brochures and on the website,” Mr Walsh said. He said the name of the company was still St Patrick’s Distillery Limited and its website was still stpatricksdistillery.ie.

The company is primarily a whiskey exporter with the United States, China and the United Kingdom cited as its three main markets.

The FSAI said it was aware of the issue but was precluded by law from commenting due to the regulations on official controls.

The increased demand had led to a proliferation of so-called boutique whiskey brands, many of which do not distil but merely age the product.

A spokesman for the Irish Whiskey Association (IWA), the Ibec group that represents the whiskey-makers here, cautioned that mislabelling of whiskey products had the potential to damage the industry’s profile internationally.

“We have been consistent that there is no place in our industry for misleading labelling and marketing. We welcome this label change,” he said.

“We will continue to pursue misleading labels and where necessary refer complaints to the Food Safety Authority of Ireland who have legal enforcement powers in this area,” he said.

Last year the FSAI published revamped guidelines on the labelling and marketing of Irish whiskey, which the IWA helped draft.

They stipulate that all distilleries involved in the production of Irish whiskey must be verified by Revenue. They also state that any statements on labels that would appear to give the impression of distilling where distilling is not yet taking place is not permitted.