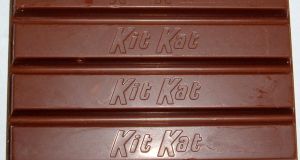 The European Court of Justice had already ruled the bar had not acquired the necessary “distinctive character”. Photograph: Wikimedia Commons

The UK high court has ruled Nestlé cannot trademark the shape of its four-finger KitKat.

The groundbreaking decision follows a long dispute with Cadbury.

Nestlé applied to register the four-finger bar as a trademark in July 2010 in an attempt to prevent other chocolate makers from using the design.

The European Court of Justice had already ruled the bar had not acquired the necessary “distinctive character”.

It cited that until a few months before the filing of the application the wrapper did not show the shape of the bar and there was no evidence that consumers check the shape of the bar post-purchase in order to ensure they have bought the intended bar. It was more likely consumers rely on the word mark KitKat to identify the product. Who would have thought?

Nestlé said it was disappointed with the court’s decision and will appeal.

A Nestlé spokesman said: “KitKat is much loved and the iconic shape of the four-finger bar, which has been used in the UK for more than 80 years, is well known by consumers.

“We believe that the shape deserves to be protected as a trademark in the UK and are disappointed that the court did not agree on this occasion. We are taking the necessary steps to appeal this judgement.”

This in not the only case where the confectionary companies have been at war over trademarks.

Nestlé blocked Cadbury’s attempts to trademark the shade of purple used in the packaging of Dairy Milk.