Board changes at Total Produce

Frank Gernon, Jerome Kennedy to retire; Helen Nolan to join the board 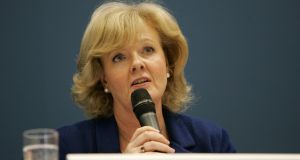 Bank of Ireland’s Helen Nolan, who is to join the board of Total Produce. Photograph: Frank Miller / THE IRISH TIMES

Ms Nolan (61) is currently a senior executive and company secretary for Bank of Ireland, and is a non-executive director of Our Lady’s Hospice and has chaired the audit committee of the Department of Agriculture for a number of years. She is a Fellow of the Institute of Chartered Accountants.

Mr Gernon, executive director, after 45 years with the company, will step down as a director prior to the 2020 agm.

Mr McCann said that Mr Gernon has “ been an integral part of our Group for over 45 years” and during his tenure he played “a key role in the stewardship and development of the group”.

Mr Kennedy, who has been on the board since the formation of Total Produce, will also retire as a director prior to the 2020 AGM. Mr McCann said that the group “has benefitted greatly from his business acumen, professionalism and wise counsel over the years”.