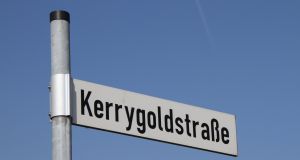 Kerrygoldstrasse (Kerrygold Street) in Germany where Kerrygold Butter is a fast-selling brand.

Kerrygold owner Ornua has stockpiled nearly 40,000 tonnes of product, mainly cheese, in the UK ahead of the possibility of a crash-out Brexit.

Chief executive John Jordan said the move would allow it to supply UK customers for about six months in the event of a major disruption to trade.

“We’ve somewhere between four to six months’ worth of stock relocated into the UK,” Mr Jordan said on Wednesday as the group reported a record €2.1 billion turnover for 2018.

The State’s largest dairy exporter has a major exposure to Brexit, with the UK market accounting for about 27 per cent of sales. It exports 80,000 tonnes of cheese annually to the UK and its Pilgrim’s Choice brand is the UK’s second best-selling cheddar cheese product.

Mr Jordan said the imposition of these tariffs would add around €55 million to its cost base, most of which would have to be absorbed by the consumer, posing a major threat to UK sales.

“There isn’t that amount of margin in the supply chain from consumer back to farmer so either it’s passed on to the consumer or it will impact the farmer,” he said.

Even in the event of a soft Brexit, Ornua estimates the additional administrative burden would add 6-8 per cent to its cost base.

“Short-term they [the UK] will continue to import, there will be price inflation but that depends on the degree of tariffs that are there, and they may get locked out export markets,” he said.

Ornua has been examining the possibility of capturing market share in the UK’s export markets to make up for any decline in UK sales in the event of tariffs being imposed.

“The UK remains a key strategic market for Ornua and any change in the status quo will create competitive challenges for Irish dairy exports,” the company said after reporting higher revenue and operating profits for 2018 largely on the back of higher dairy prices as production here was hampered by unseasonable weather in the first part of the year.

Turnover for last year rose by 0.6 per cent to €2.08 billion while operating profit was €40.4 million, a rise of 14.8 per cent year-on-year. Kerrygold is now the fastest-selling food and drink product in Germany, oustripping Coca-Cola. It is also the second biggest butter brand in the US, with 2.6 million packets of butter sold each week.

Ornua, formerly the Irish Dairy Board, paid a total year-end bonus of €19 million to its members, an increase of 27 per cent year-on-year. Net debt, meanwhile, was €110.1 million, with the late production season and Brexit planning causing the group to carry additional stock over the year-end.

“Kerrygold had a stand-out year and our US ingredients business delivered record growth,” he said.

Ornua said it would look to drive growth for its full-brand portfolio and food ingredients business across its 110 markets.

Global demand is expected to grow by up to 1.5 per cent during the year, with any volatility likely to be supply driven.