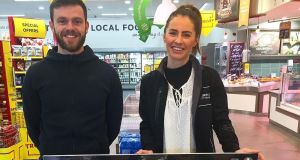 A start-up healthy meal company expects to reach €1 million in revenues this year although it fears that could be stymied by a no-deal Brexit.

Simply Fit Foods, founded in 2015, expects to reach the milestone by the end of 2019, having done deals with key Irish retailers including Dunnes Stores, Supervalu, Centra and Joyce’s.

However, one of its biggest contracts in Northern Ireland, which was due to begin in January has been put on hold as a result of the ongoing Brexit negotiations.

Co-founder Evelyn Garland said the company is planning to launch nationwide in the “coming months” and is forecasting revenues in the region of about €1 million. It is also launching two snack products and a breakfast product in the summer.

At present, the company has a range of four products designed as a “healthy option on-the-go”. The range was designed after co-founder Luke Judge was diagnosed with a heart condition called Wolf Parkinson White.

Initially, Simply Fit Food started solely as an online food delivery company, although it subsequently closed down that side of the business and now focuses solely on retail. And, having started cooking all of the products individually, it has now outsourced production.

“The difference between our meals and the standard ready made meal is the ingredient quality of the meal,” Ms Garland said. “All too often it’s for people who don’t really care about their health whereas we’ve tried to make healthy eating fast, convenient and delicious.”

But that move, coupled with outsourcing, has required greater scale resulting from the tighter margin. While the company is currently selling only in Leinster and Munster, it intends to widen that footprint to the rest of the country by the end of this year.