Mixed fortunes for producers as consumers opt for less meat 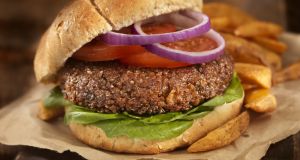 A continued shift away from eating meat spells bad news for the Irish beef sector. However the move towards meatless alternatives could prove a boon for Kerry Group as food producers look to boost the flavour and appearance of their products. That is according to Arthur Reeves, international director, global food research at Barclays, which is betting heavily on a revolution in the agrifood sector.

Barclays predicts continued changes in the sector due to a growing global population, environmental concerns and a cultural shift away from consuming meat.

Mr Reeves, who was in Dublin recently to discuss a series of new reports the bank has done on the future of food, said Barclays expects the market for alternative plant-based “meat” will reach $140 billion (€125 billion) over the next decade. This is equivalent to 10 per cent of the overall €1.4 trillion global meat industry.

He said this was bad news for beef producers locally, but that it also represented opportunities for the likes of Kerry Group which has invested heavily in nutrition science in recent years.

“We’re advising fund holders on what stocks to buy, and what we see with plant-based products is an opportunity for growth,” Mr Reeves said. “Companies such as Kerry, which are helping producers with the taste, texture and appearance of plant-based products stand to gain.”

An industry veteran with over 18 years experience working at Dairy Crest before becoming global food research director at Société Générale, Mr Reeves said it was becoming apparent that the move away from meat was more than a fad. He said the market for plant-based protein has the potential to have a bigger impact than other key market disruptors, such as electric vehicles.

While he predicts a big rise in demand for plant-based meat substitutes, Mr Reeves said laboratory-based “meat” is several years away from being available in supermarkets.

Barclays also estimates that plant-based dairy could penetrate the market to the value of €70 billion globally.

Mr Reeves said that with a growing global population, moves towards increasing food sustainability and reducing waste will also increase. Barclays estimates that about €1 trillion of food is wasted globally each year, a figure that is forecast to rise to €1.5 trillion by 2030.

The bank said waste is an overlooked driver of climate change, accounting for as much as 8 per cent of greenhouse gases. Mr Reeves said he expected to see significant moves to change this through supply-chain innovations in the coming years.