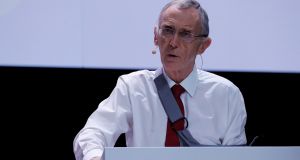 Shareholders in troubled food group Aryzta have narrowly voted through a proposed €790 million capital raise, which the company insists is necessary to pay down debt and fund a major restructuring.

The company, which makes burger buns for McDonald’s and owns the Cuisine de France brand here, faced considerable shareholder opposition over the plan with its largest investor, Cobas Asset Management, voting against the plan.

Cobas accused management of painting too grim a picture of the company’s finances. In the end, the resolution was passed by just 53 per cent of shareholders, with 47 per cent against.

In a tense annual general meeting in Zurich, Aryzta chairman Gary McGann warned shareholders: “The consequences of not raising the type of share capital we’re talking about is that this business will limp along and be a wounded animal for quite a length of time.”

The move would technically dilute shareholdings by 90 per cent if investors chose not to exercise their rights. The discounted price offered to shareholders on the new shares – at 40 per cent – was also larger than expected, reflecting the company’s uncertain market position.

After the vote was passed, Mr McGann said it represented an “enormous step forward” for the company and would allow management return to “running the business rather than running the balance sheet”.

He said €500 million of the funds raised would be used to pay down the company’s debt, which stands at close to €1.6 billion following a decade-long acquisitions spree, which saw the group buy 12 companies between 2008 and 2014.

It will also boost the company’s balance sheet ahead of the planned sale of its 49 per cent stake in French frozen food group Picard, which it bought for €448 million in 2015 in a deal that was badly received by investors.

Reflecting the current level of anger with management, votes to reappoint Mr McGann as chairman, and Kevin Toland as chief executive, showed significant opposition from investors.

In the case of Mr McGann, 59 per cent voted to reappoint him, 26 per cent opposed the move while 15 per cent abstained.

In his opening address to the agm, Mr McGann told shareholders that the resolution to raise €800 million in fresh equity was “a last resort and never a first resort”.

“Our CEO is also on record as saying that it would only be considered after all other reasonable options had been exhausted,” he said. “Those, regrettably, are the circumstances with which we are faced today.

“Last year, we believed we had established a baseline for the business and that we were at or close to the bottom of a performance cycle. Clearly we were wrong and we underestimated the challenges facing the business.”

Shares in the Irish-Swiss group were suspended from trading ahead of the agm, which was held just outside Zurich.

The pricing of the rights issue was a surprise to analysts. “Our worst-case scenario was based on a capital increase at two Swiss francs per share,” Vontobel analyst Jean-Philippe Bertschy said.

“The dilution is substantial, as is the downside to current share price levels. Management will be under massive pressure to execute the plan in a timely manner,” Mr Bertschy added, reaffirming his reduce recommendation on the stock.

“The dilution caused by the large capital increase is the lesser evil than the increased risk of total loss for the shareholder,” he said, though he acknowledged that the shares would “typically come under pressure as a result of the trading in subscription rights”.