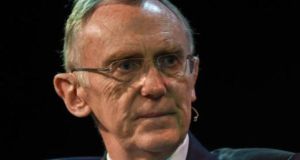 A group of dissident shareholders in Aryzta is understood to be open to dropping its demand that chief executive Kevin Toland step down from the board of the Swiss-Irish baked goods group if it agrees to a wider overhaul of non-executive directors.

The group of shareholders, led by Swiss activist investment firm Veraison Capital and which have a combined stake of 18.4 per cent stake in Aryzta, asked the company on May 20th to hold an egm at which they are proposing resolutions to unseat chairman Gary McGann and four other directors from the board.

The investors, also including Cobas Asset Management, have also proposed that Mr Toland be removed from the board to free him up to focus on his executive functions, in line with standard Swiss corporate governance standards.

News that the Veraison-led group would be prepared to compromise on the CEO’s board position is the clearest sign yet that it is prepared to work with Mr Toland over the long term as it continues its campaign to “simplify” the business.

Veraison announced on May 13th that it had joined forces with Cobas, and was looking to engage in “constructive dialogue” with Aryzta.

Veraison claimed two weeks ago that Aryzta’s decision to hold an egm on board proposals in the middle of August amounted to “delaying tactics” as it would be taking place after a strategic review of the business is completed. Aryzta announced in May that it had retained investment bank Rothschild to carry out a review of its corporate and financial options by the end of July.

There has been speculation in the market that Veraison might press Aryzta to sell off its problem North American unit, and potentially restructure its almost €900 million of subordinated – or hybrid – debt.

The value of these bonds, which have no maturity date, have fallen sharply in recent months, with 400 million Swiss francs of notes issued in 2013 currently trading at less than 60 US cents on the dollar, compared to almost 90 cents in February.

However, Veraison is said to be supportive of the hybrid notes remaining in place, though it is keen for the company to pay down its mainstream bank borrowings to put its balance sheet on a firmer footing.

In addition, it is believed that the dissident shareholders are open minded on strategic direction, but want this to be agreed after a boardroom overhaul.

Mr Toland had been making headway since taking over what was a deeply troubled business in late 2017, overseeing almost €400 million of asset sales, reducing net debt, and pursuing a cost-cutting programme designed to deliver €200 million of savings in the three years to July 2021.

However, shares in Aryzta are down more than 85 per cent from when the company raised about €800 million in an emergency share sale in late 2018.