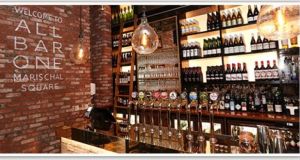 An All Bar One pub in the UK, part of the Irish-backed Mitchells & Butlers group.

Irish-backed UK pub owner Mitchells & Butlers said on Friday it had obtained debt waivers from its creditors in exchange for an agreement to not return money to shareholders or repay bond debt until at least September 2021.

The Birmingham-based company, in which Irish horse-racing magnates JP McManus and John Magnier hold a combined 23.5 per cent stake, also said it had agreed to an extension of existing credit facilities as well as an extra £100 million in liquidity, giving it access to £250 million financing till the end of 2021.

The owner of 1,748 pubs, bars and restaurants under a number of brand names, including All Bar One, O’Neill’s and Ember Inns, has put 99 per cent of its workforce on leave as its outlets have been closed for more than three weeks.

In March, the FTSE-250 listed company warned that it “could suffer a significant loss” in the four weeks before it was due to have its covenants tested as the spread of Covid-19 was set to lead to a slump in sales.

That warning predated a general UK lockdown, and came at a time when Boris Johnson’s government was merely recommending that people avoid pubs and restaurants. It remains uncertain when restrictions will be eased.