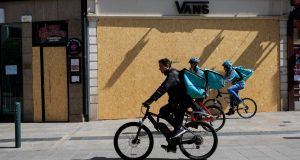 Food delivery company Deliveroo, alongside 57 of the restaurants it works with, has called on the Government to ban commercial evictions and cut the VAT rate for restaurants to zero per cent in a bid to help the sector recover from the Covid-19 crisis.

A letter from the company’s chief executive and founder Will Shu has been sent to the leaders of Fianna Fáil, Fine Gael, the Green Party and the Oireachtas special committee on the Covid-19 response looking for several measures to help the restaurant sector.

The measures proposed include a moratorium on commercial evictions as long as social distancing measures are in place, a reduction in the VAT rate for the restaurant sector to zero per cent on food, a change to planning laws to permanently allow restaurants operate as takeaways and an extension of the wage subsidy scheme.

The company’s calls add to those from restaurant bodies which have made clear the extent of the damage the pandemic will have on the food trade.

Deliveroo itself has not escaped from the reversal in fortunes for the sector. The Irish Times reported last month that the company was to lay off seven of its 16 staff in Dublin. It is understood those redundancies have now taken place, while sources close to the company suggested there were no further plans for redundancies.

“While we recognise and welcome the support the Government has given to the sector to date, more support is needed to ensure long-term viability,” Mr Shu said, outlining the measures.

The company, which launched its service in the Republic in 2015 and currently works with more than 1,300 restaurants across Dublin, Cork, Limerick and Galway, also suggested that the Government consider other measures such as offering restaurants grants to help with rent.

Other signatories to the letter include restaurateurs behind Five Guys, Eddie Rockets, Xian Street Food and Musashi. In total the signatories represent almost 100 premises and employ more than 1,100 people.