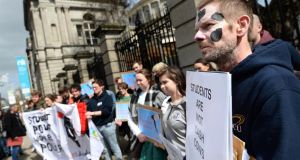 They outlined their dismay over the delay in enacting the legislation, which would afford more rights to students living in purpose build student accommodation (PBSA).

Currently, students living in these complexes are deemed ‘licensees’ and not tenants, and therefore have fewer rights.

Rent pressure zone legislation, which caps rent increases at four per cent per year, currently does not apply to student accommodation.

This bill seeks to change that.

Speaking in the Oireachtas, NUI Galway’s Students’ Union President Megan Reilly said: “We have a student population of over 18,000 and our students have been affected badly by issues particularly around rent certainty and security of tenure.”

“These bills address some of the issues that students have been facing, but really just scratch the surface of what’s going on.”

“Not only are these issues frustrating and upsetting students, they are affecting their access to education.”

Reilly also commented on the specific case of Cúirt na Coiribe in Galway, which made headlines last year for increasing their rent by €1000.

“In the SU we came out strongly against the increase, and as well as protesting, we took a case against the accommodation provider with the Residential Tenancies Board, and this is how we learned about the four per cent rent pressure zones not extending to purpose-built student accommodation, and the difficulties with residents in PBSA being classified as a licensee instead of a tenant, and the lack of rights that are afforded to students because of this.”

“In our case, even though it was called a license agreement, the adjudication treated it as a tenancy.”

“However, we have learned from Threshold that a similar case in Cork was treated as a licensee agreement, showing the lack of clarity around how these cases should be treated, and the anti eviction bill will go a ways towards clearing this up.”

“[OUR CASE] unfortunately failed on a technicality, but it was then we started lobbying for the caps to be extended to purpose built student accommodation.”

Speaking afterwards, Ms Reilly said there had been a private session about the bill two weeks ago, and that a TD had raised a concern that nothing had been done since this.

“We were told it should be going through in April, that’s our hope. We need to get it through now before the summer session is out as nothing will be done until next year then,” Reilly said.

Michelle Byrne, Vice President of the USI, outlined the massive need for affordable student accommodation. “On the night of the census in 2016, there were 429 homeless students in Ireland, making up over eight per cent of the total homeless numbers.”

“This is expected to increase to almost 26,000 this year. This means we are still 16,000 beds short even if all PBSA which is projected is successfully completed,” she explained.

The USI is calling for the Residential Tenancies (Greater Security of Tenure & Rent Certainty) Bill 2018 to be passed urgently, as currently students living in purpose-built student accommodations are facing rent increases of 10-20 percent.

“Many students renting are effectively ‘licensees’, rather than tenants. In other words they are living in legal limbo, without the protections of a tenancy and without recourse to the Residential Tenancies Board.”