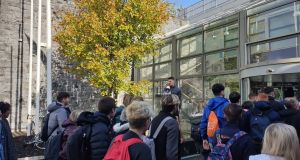 Some 120 students attended a protest for the reopening of Caifé na Gaeilge. Photograph: Conor Brummell

NUI Galway’s Students’ Union has officially confirmed the closure of Caifé na Gaeilge, located in Áras na Gaeilge. The Students’ Union released a statement, stating that the Caifé was closed, having been “operating on a loss since 2008”.

The statement detailed how Caifé na Gaeilge has had a history of being unprofitable for Students’ Union Commercial Services (SUCS Ltd), the company in charge of the licensing fees that the University pays to run other services on campus, such as the SU Shop, Sult, Smokey’s, An Bhialann, Friar’s and Zinc. SUCs Ltd took over the operation of the Caifé in 2008, on the basis that the University would pay for any losses incurred, as well as paying a management fee to SUCS Ltd.

However, the statement claims that the University has been failing to keep its side of the agreement since 2010, stating, “The University has stopped paying its invoices and has failed to pay the management fees or cover losses”, and that, “the losses and management fees incurred by SUCs Ltd in Caifé na Gaeilge is in the region of €197,000”. As well as this, the licensing fees required to run these commercial services on campus have risen to approximately €230,000 per annum.

This has resulted in SUCs Ltd informing the University that they can no longer continue to run Caifé na Gaeilge. The University has been asked to honour their original agreement by the Students’ Union, but they are reportedly unwilling to do so. The Students’ Union have also suggested that a small portion of the profits from the other commercial services on campus be ring-fenced to cover the losses of Caifé na Gaeilge. The University refused this proposal.

In response to the closure, a protest for the reopening of Caifé na Gaeilge was organised on the 9th of October, which saw more than 120 students come to show their support. The protest was organised by the Cumann Gaelach, and headed by Aimée Ní Chunaigh, auditor of the society.

“When I think of the crowd that appeared today, the first thing I think is how thankful we are here at the Cumann Gaelach. People tend to think of Irish speakers as a minority, but you don’t realise how many of us are actually here and present and want to use this service through Irish. The next step is to give the University the chance to respond and try to rectify the decision to close Caifé na Gaeilge,” she said.

NUI Galway’s willingness to call itself a bilingual campus has also been scrutinised.

Speaking at the protest, Clare Austick, Students’ Union President in NUI Galway, stated, “Going forward, we must protect the spaces we have for Irish speakers on Campus. We must also encourage more spaces to become available for people to engage in the Irish language”.

“The University must be held accountable and they need to be questioned about their actions. The University is quite happy to advertise itself as a bilingual campus, but what does that mean in practicality? Are they encouraging the Irish language on campus? I don’t think so.”

John Walsh, Senior Irish Lecturer in NUI Galway, also expressed his disappointment. “This is more than a question of just tea and coffee - this is a question of language rights and of social spaces for Irish speakers,” he said.

“There are very few spaces in society where Irish in general is dominant. There are very few places where people who are learning, or people who want to speak Irish, can go into where they’re sure Irish is the default language. That is why this protest is important. It doesn’t bother me that I have to walk an extra few minutes to go and get a cup of coffee, but it does bother me that the Irish language is not being given a social space where it can grow”.

Darragh Mac Giolla Phádraig, a fourth-year student who has been heavily involved with the Cumann Gaelach over the past few years, spoke about the Cumann’s next steps regarding the reopening of Caifé na Gaeilge.

“It’s just disappointing that the importance of the Caifé to Irish speakers on campus is being overlooked. It is stated that the University is a bilingual campus, yet why do we have to protest in order to get something as simple as a cafe? As a bilingual campus, they should have every service available through English and Irish - especially seeing how much Irish speakers pay the University in fees every year,” he concluded.

“The University is reviewing the matter in consultation with stakeholders with the intention of reopening the café food service and in the meantime the University has committed to keeping the Café space open and available to those who wish to use the facility”.

As NUI Galway closes the one and only service available through Irish on campus, the question of whether it can continue to call itselfa bilingual University remains unanswered.