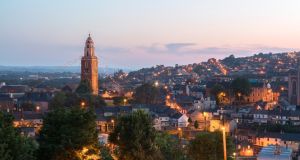 Cork is hoThe ultimate guide to college life in Ireland.

The ultimate guide to college life in Ireland: So you’re going to college. But where? “Dublin” might seem like one city, but there’s a big difference between attending Trinity or one of TU Dublin’s campuses, where students can step off campus into the heart of the city, and going to DCU in the suburbs of Glasnevin or UCD out in Belfield. Read more here.

Mindhunter drags us back to the place where the serial killer craze began: Mindhunter surged back to Netflix this week, bringing another round of procedural thrills to the online streaming behemoth. Read more here.

Taylor Swift: Lover review – It’s not bitter but her grudges smudge her star power: Five years ago Taylor Swift cheerily sang that the haters were gonna hate and the only thing for her to do was to shake it off. Alas, that’s proving a little difficult. Read more here.

Lies, bullsh*t and knowledge resistance: A spotter’s guide: If the combined rise of Donald Trump and Boris Johnson has done any good it has been to reignite interest in epistemology. A micro-industry of books, research papers and expertise has grown up around the “science of irrationality” and the nature of truth statements. Read more here.

What should you do if you think you might have coronavirus?