Following in her mother’s footsteps, Kravitz is starring in a new TV adaptation of the Nick Hornby book 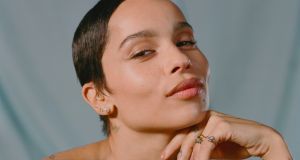 Zoë Kravitz: ‘I was trying to re-create a world that I know, and that’s what it looks like. It doesn’t look like a bunch of white girls.’ Photograph: Ana Cuba/New York Times

One recent afternoon, Zoë Kravitz is sitting in a sushi restaurant on the second floor of a Los Angeles mall, but her thoughts are 5,000km and 10 or so years away. Specifically she is thinking about her weed guy. He’d come around with product concealed in a guitar case. “He would only talk in code,” Kravitz says. “Like, ‘Do you want a guitar lesson today?’ But then sometimes he would screw it up, and be like, ‘Do you want guitar?’ I’m like, This isn’t code any more.”

She was in her early 20s then, working only on and off, just another smart, young Brooklynite with time on her hands and a propensity for overthinking. She couldn’t have known it, but she was also doing research for her first headlining role, in the new TV series High Fidelity, based on the 1995 lad-lit novel by Nick Hornby. Kravitz plays a Brooklyn record store owner whose life – including her love life – is going nowhere particular, a part for which all those guitar lessons were inadvertent research.

Big Little Lies felt really fresh and necessary, and like it was filling some kind of creative void I didn’t know I’d really had

It feels like Kravitz, who is now 31, has always been famous – an indelible screen presence and iconic parents will do that – but for years she’s been on the fringes of the action, playing haunted supporting characters in epics like Mad Max: Fury Road and the Divergent series. But that’s about to change. In a day or two she is leaving for London to start shooting her biggest movie role to date, playing Selina Kyle – better known as Catwoman – in Matt Reeves’ The Batman. Robert Pattinson plays the Caped Crusader, and Colin Farrell is the Penguin; in true star-of-a-comic-book-adaptation fashion, Kravitz says she can’t say much else, except that she never imagined finding herself central to a movie like this one.

Just a few years ago, Kravitz – whose parents, the actor Lisa Bonet and the rocker/scarf influencer Lenny Kravitz, are both African American and Jewish – had been discouraged from auditioning for a part in one of Christopher Nolan’s Batman films. Not by Nolan personally, she says. It wasn’t a Catwoman-size part.

“It wasn’t like we were talking to the top of the top in terms of who was casting the thing,” she says, “But they said they weren’t ‘going urban’. I thought that was really funny.” A lot has changed since – for Kravitz personally, and in the business as a whole. From Tessa Thompson’s Valkyrie in Marvel’s cinematic universe to Halle Bailey’s Ariel in the forthcoming live-action Little Mermaid reboot, it has become less unusual for actors of colour to book roles not originally conceived with an actor of colour in mind, particularly in comic-book and fantasy material, where parallel universes collide and anything is possible. (It’s worth noting that women of colour have played Catwoman twice before, including Halle Berry in a somewhat infamous 2004 film.)

Sometimes, though, inclusive casting highlights just how much work Hollywood – newly woke but still groggy – has left to do when it comes to actually telling diverse stories. For two seasons, on Sky Atlantic’s Big Little Lies, Kravitz has played Bonnie Carlson, the yoga-instructor wife of Reese Witherspoon’s character’s hunky ex. Amid a stacked cast of A-listers going for broke – trashing one another verbally, sometimes trashing rooms literally – she has been an island of wary reserve, her eyes suggesting painful depths.

But in the first season Bonnie seemed to float at the periphery of a story that prioritised the tribulations of its well-to-do white characters instead. In the second season, Bonnie got a real story line – which required her to sit by her comatose mother in a hospital room few of the other characters ever visited. Critics and viewers noticed; the show was roundly criticised for its apparent lack of interest in Bonnie’s inner life.

Kravitz says she’d been drawn to the role of Bonnie – who’s white in the Liane Moriarty novel that inspired the series – because it was a chance to work with the director Jean-Marc Valle – and with “this dream cast” of Witherspoon, Nicole Kidman, Laura Dern and Shailene Woodley, who she’d made three Divergent movies with and who she’d practically grown up alongside. When she first read the script, Kravitz says, “it felt really fresh and necessary, and like it was filling some kind of creative void I didn’t know I’d really had.”

There’s people of colour everywhere. It’s unavoidable. Same thing with Woody Allen – like, how do you not have black people in your movies? It’s impossible

Zoë Kravitz is an executive producer of High Fidelity as well as its star, and the show – funny and poignant and surprisingly personal – feels like a product of her sensibility. Kravitz, who attended high school in New York and has fond memories of loitering after school in grubby record shops like Kim’s Video and Music, the bygone East Village institution, says she’d long been a fan of the book and particularly of Stephen Frears’s film version from 2000, which starred John Cusack as Rob and her mother as a singer with whom he rebounds.

“For some reason,” she says, “High Fidelity was one of the few pieces of art that my parents had been a part of that I was really able to separate from them. It’s a weird thing, because it can be really uncomfortable and strange watching your mom kiss John Cusack or whatever, but it became a film that I loved and watched and could quote.”

In the initial script, the main character lived in Los Angeles and would have worked at a radio station. Kravitz proposed moving it to New York, and into a dusty basement record shop. Those choices, she says, helped determine other aspects of the show, like setting the story in Crown Heights, a part of Brooklyn where a dusty basement record shop and its owner could realistically survive. (Kravitz, who married the actor Karl Glusman last June, has lived in Williamsburg for more than 10 years, long enough to watch gentrification transform it; her favourite bagel shop is now an Apple Store.)

The staff of the record store now consists of two women of colour (Kravitz’s Rob and Da’Vine Joy Randolph of Dolemite Is My Name) and a shy, gay man (David Holmes). When Rob runs down her top five heartbreaks in flashback, the list includes women as well as men.

None of this, Kravitz says, was about clearing some imaginary bar for wokeness. They just wanted a cast that looked real. “I was trying to re-create a world that I know,” Kravitz says, “and that’s what it looks like. It doesn’t look like a bunch of white girls, like the show Girls,” whose portrayal of New York-area hipsterdom struck many viewers – Kravitz included – as demographically specious.

“If that show was in Iowa or something, fine, but you’re living in Brooklyn,” she says. “There’s people of colour everywhere. It’s unavoidable. Same thing with Woody Allen – like, how do you not have black people in your movies? It’s impossible. They’re everywhere. We’re everywhere. I’m sorry, but we’re everywhere.”

Kravitz acknowledges that there might be reflexive resistance to the idea of a gender-flipped High Fidelity, as there is to gender-flipped anything, among a certain class of consumers. “I think a lot of white men who identified with the book think it’s theirs,” Kravitz says, “and are ready for us to screw it up, and are going to have trouble seeing it in a different light. But I think if they get past that thing, they’ll see that we actually really did honour the property, I think.”

This kind of conversation is good practice – Kravitz is about to fly to London and shoot a movie in which she plays an iconic comic-book character, and she’s aware that any attachment High Fidelity fans may have to an idea of Rob Gordon pales in comparison to the proprietary feelings contemporary nerddom harbours regarding Batman.

“As long as I don’t allow it to get in the way of what I need to do to find this character and make her my own, so that it can be as authentic as possible, I welcome all the fans and their opinions and their love for this world,” she says, with a diplomatic smile. – New York Times

High Fidelity streams on Hulu in the US; it will air in Ireland and the UK at a later date