Oscars 2020: Everybody loves Parasite. But that’s not why it won

Analysis: The youth vote and anti-Netflix bias were as important as the film’s brilliance 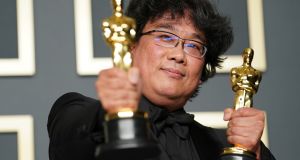 One year ago, when Alfonso Cuarón’s Roma failed to win the best picture, more than a few pundits concluded that the Oscars were never going to give their top prize to a film in a language other than English.

If Cuarón couldn’t win then who could? Roma had won everywhere and was a distinct favourite going into the ceremony. The Mexican filmmaker had already won two Academy Awards. But Roma lost out to the meat-and-potatoes pleasures of Green Book.

With this in mind, only the most cock-eyed optimists predicted an incoming best picture win when Bong Joon Ho’s Parasite took the Palme d’Or at Cannes last May. Everyone there loved the picture. Bong is a popular figure. But just look at that Roma debacle. If it’s got subtitles the Academy just isn’t interested.

Yet here we are. The first “foreign language” film to win the biggest prize at the 92nd Annual Academy Awards did not come from France or Germany or Japan or Russia. The award acknowledged the recent rise in South Korean film (and Korean popular culture in general).

Speaking to this writer before the awards, Bong was at a loss to explain why his country was suddenly a cinematic powerhouse. “Even among ourselves we wonder why Korean cinema exploded,” Bong said. “We joke that maybe in the late 1980s the government put something in the water that encouraged cinematic talent.”

The drugs worked. On Sunday, Bong looks to have become, after Walt Disney, only the second man to win four Oscars on the same night. (“Looks to”? Well, best international picture is officially awarded to the successful nation, but Bong’s name is there on the statuette.)

How did this happen?

Before getting into the arcane details, it is only fair to note that voters really, really liked the film. Every year, The Hollywood Reporter publishes a selection of “brutally honest” anonymous contributions from Academy members. Even the grumpiest and most conservative this year acknowledged that they loved the pace and energy of Bong’s breakneck farce.

Last year, similar contributions on Roma relayed more admiration than passion. You got little sense that less adventurous voters would be watching the Mexican film a second time.

We also may, in 2019, have underestimated a stubborn resistance to Netflix. The streaming service threw millions at Roma during awards season, but voters who prioritise cinematic exhibition are still suspicious of the new giant. This year, Netflix scored only two wins from its 24 nominations. They may have allowed Martin Scorsese to make The Irishman, but they couldn’t convert even one of its 10 nods into a statuette. That conversation will continue.

Still, much-loved foreign films have been failing to win Oscars for close to a century. We can’t blame Netflix for the failure of The Seven Samurai, 8 ½, The Seventh Seal, Tokyo Story or La Règle du Jeu to take home the top prize. None of those famous pictures was among the mere 12 to secure a best film nomination since Jean Renoir’s La Grand Illusion lost to You Can’t Take It With You in 1938.

We can’t credit Parasite’s success merely to its brilliance (La Grande Illusion isn’t a bad flick) or its accessibility (Crouching Tiger, Hidden Dragon, nominated in 2001, doesn’t much strain the intellect).

Credit must be given to Neon, the North American distributors, for getting the film seen in that part of the world. The independent producer structured the release pattern cannily to exploit growing word of mouth. The undeniable charm of “director Bong” and his attendant translator Sharon Choi helped create an irresistible narrative for awards watchers.

When Parasite became the first foreign language picture to win the ensemble award at the Screen Actors Guild, the bookies tightened their odds considerably.

It also matters that, in recent years, the Academy has become younger and more international. In the aftermath of the #OscarsSoWhite debacle in 2016, the authorities made a dramatic effort to draft in new members who better reflected the diverse nature of cinema audiences. As many as 928 were invited to join last year. Young Irish actors such as Barry Keoghan, Domhnall Gleeson and Ruth Negga were among those recently drafted.

As a recent nominee, Negga was always a likely inductee, but, in earlier years, Keoghan and Gleeson would, most likely, still be waiting for a call. Despite recent embarrassments such as this year’s scarcity of black acting nominees, the new electorate has proved more open to independent and international material. Moonlight won in 2017. Parasite has just made history.

That audience listens to Korean pop music, enjoys Japanese anime and is open to cinema from all corners. Helped out by a proportional voting system that has, since the start of the last decade, made the best picture race more volatile, they were always more likely to break the long, disgraceful hex on foreign language cinema.

None of which should detract from Bong’s achievement in making a film that addresses current concerns about economic inequality through the medium of the blackest, speediest comedy. The Academy will never be the same again.