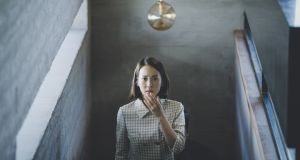 Danger down under: Cho Yeo Jeong in Parasite

PARASITE ★★★★★
Directed by Bong Joon Ho. Starring Song Kang Ho, Lee Sun Kyun, Cho Yeo Jeong, Choi Woo Shik, Park So Dam. 16 cert, gen release, 132 min
A working-class family invade the home of wealthy snoots in a breakneck farce from the Korean master. There is anger here at the inequalities in society. Bong Joon Ho, who shares screenwriting duties with Han Jin Won, looks to be arguing for the imminence of an apocalypse. What really hooks you, however, is the gorgeous smoothness of the narrative machinery. We get jolts. We are not short of shocks. But, as in all the best farce, the surprises ultimately seem preordained. Nominated for six Oscars. Full review DC

Touching, terribly moving documentary concerning the trials of woman and her elderly mother in North Macedonia. There is the danger of anthropological tourism here. As we might once have flicked through the pages of National Geographic, we can now watch Hatidze manage the bees, sing to her poor mum and scare away neighbouring wolves. Her character is, however, too powerfully realised for such cynicism to gain purchase. In the upcoming Oscars, Honeyland is the first film to be nominated for both best documentary and best international feature (formerly best foreign language picture). Full review DC

We’re introduced to Luke as a lonely eight-year-old who, upon witnessing the aftermath of a mass shooting, is befriended by Daniel. Nobody else can see or hear Luke’s new chum, but it seems like a harmless enough invention – until Daniel suggests they do something awful to Luke’s emotionally unbalanced mother (Masterson). Consequently, mum suggests that her son visualises Daniel in an old dollhouse. And there he remains until adulthood, when grown-up Daniel (Schwarzenegger) returns from the Freudian depths to protect a fragile Luke (Robbins). Suddenly, Luke has a lot more swagger and two love interests. Daniel, however, is becoming increasingly dominant in their shared body. Mortimer’s second feature, co-written with novelist Brian DeLeeuw, offers a novel convergence of mental health issues, toxic masculinity and occultish vibes. Full review TB

“Doldrums. Doldrums,” warns Dafoe’s salty lighthouse keeper. “Eviler than the Devil. Boredom makes men to villains.” Director Eggers (The Witch) has created another distinctly American gothic that blurs the line between deprivation and madness. In late 19th century New England, Winslow (Pattinson) is sent to serve as a wickie on an isolated island under the supervision of the cantankerous Wake (Dafoe). Low-level resentment and bickering spills over into boozy violence and full-blown Oedipal shenanigans. Spiritual advisers ST Coleridge and RL Stevenson cast shadows across the intriguingly murky mythology: DOP Jarin Blaschke is rightly up for an Oscar for his claustrophobic 1.19:1 aspect ratio monochrome. But, ultimately, The Lighthouse stands as a monument to two titanic performances. Full review TB

Singular drama concerning the relationship between a cynical journalist (Rhys) and the US children’s entertainer Fred Rogers (Hanks, up for an Oscar). Heller, the gifted director of Diary of a Teenage Girl and Can You Ever Forgive Me?, knows exactly what sort of film she is making: one interested in Mr Rogers’s reputation and awake to his odd techniques. But this is really an intimate story about the adjustments we make in middle age. Beautifully made. Skilfully performed. Full review DC

Queen (Turner-Smith) and Slim (Kaluuya) meet up in a diner for a date. On the way home, they are stopped by a racist police officer and, after various humiliations, end up half-accidentally shooting him dead. To that point the film has been a wonder of tension and anxiety. When the couple go on the lam, it leaks plausibility at an alarming rate. For all that, the two leads – both British, interestingly – have the skill and charisma to maintain interest. Full review DC

Liz Nugent: ‘People have accused me of being brave, but what is brave about surviving?’
9