Review: This charming film is a masterclass in documentary making 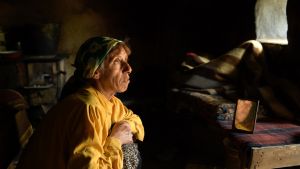 Honeyland focuses on a beekeeper named Hatidze in North Macedonia

This heart-breaking North Macedonian project is already the answer to an Oscar trivia question nobody previously needed to ask. Tamara Kotevska and Ljubomir Stefanov’s film is the first to be nominated for both best documentary and international feature (formerly best foreign language picture).

It fully deserves the honour. The film began existence as a government-sponsored video on the Bregalnica region in the centre of the nation. The film-makers became fascinated with a beekeeper named Hatidze – struggling to keep the old ways going – and ended up putting her at the centre of a verité masterclass.

The viewer will sometimes wonder how the camera manages to be in the right place at every right time. It would, however, be churlish to ask too many questions of such a charming entity.

We begin in a rough, tarnished idyll. The middle-aged protagonist shares a basic cottage with her elderly mother, a dog named Jackie and at least one affectionate cat. She tends various scattered hives and makes occasional trips to Skopje to sell her wares. The film-makers could have fashioned a delicious folk saga from that material alone. What pushes Honeyland into more fecund territory is the arrival of a disruptive family to the plot next door.

Hatidze is largely welcoming of the cow herder and his brood. She chats amiably to him and talks him through the mechanics of beekeeping. We end up with the sort of plot that it is possible to spoil. We won’t do that, but we will point out that, in its later stages, the picture asks questions about the challenges of sustainability.

Hatidze speaks for the old balance. Though far from bad people, her new neighbours stand in for less responsible strategies. Large and small disasters develop. (Viewers should be aware that, along the way, we encounter the troubling aftermath of animal cruelty.)

There is the danger of anthropological tourism here. As we might once have flicked through the pages of National Geographic, we can now watch Hatidze manage the bees, sing to her poor mum and scare away neighbouring wolves. Her character is, however, too powerfully realised for such cynicism to gain purchase. “If you were a baby I’d take you in my arms,” she says to her mother as she imagines unlikely escape.