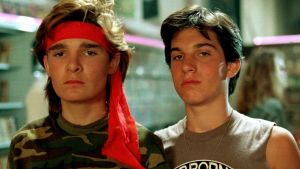 Vintage cheese: Corey Feldman and Jamison Newlander in the The Lost Boys

It’s a strange thing returning to The Lost Boys some 33 years after it stormed the box office to beat out Vamp and Near Dark to become the biggest non-Drac vampire film of the decade. Two unnoticed sequels and a cancelled 2018 TV spin-off confirm the film’s uniquely contemporaneous charms.

The Lost Boys established Dianne Wiest as the the Reagan-era suburban movie mom to beat (a role she’d reprise in Parenthood and Edward Scissorhands). It’s the project that first brought together The Two Coreys, Corey Feldman and Corey Haim: they would subsequently appear in nine movies together, several TV shows, and had a dedicated fan hotline. (They continue to make headlines, long after Haim’s death in 2010 for terrible, tragic reasons.)

Richard Donner’s original plan for The Lost Boys was to cast Goonies-aged teenagers as vampires, echoing the Peter Pan allusion of the title. But he left the project for Lethal Weapon, making way for Joel Schumacher, who had just completed work on St Elmo’s Fire, and who added such distinctly Schumacherian flourishes as Muscly, Oiled, Gyrating Saxophonist in Skintight Purple Pants (Tim Cappello). And turning the vampires into leather-clad bikers led by Kiefer Sutherland.

Hence, brothers Michael (Jason Patric) and Sam (Corey Haim) and their recently divorced mother (Dianne Wiest) move in with their Grandpa (Barnard Hughes) in a fictional California beach town billed as the Murder Capital of the World.

Sam soon falls in with self-styled vampire-hunters (Corey Feldman and Jamison Newlander), who bridge the talking guide gap between Charon, ferryman of the underworld, and the Scream franchise’s Randy Meeks. Meanwhile, Michael becomes intrigued – that’s 1980s speak for stalking someone you’ve never even spoken to – Kiefer’s best gal Star (Jami Gertz, who went on to own the NBA’s Atlanta Hawks, so there!).

Star is something like a Manic Pixie Dream Girl stripped of all attributes besides boyfriends and breasts. She has one job. Suck Michael’s blood. But then they have sex and she goes all weak at the knees instead. Bechdel Test? Ha. That may date to 1985, but studio films that might make the grade did not.

The sexualised vampires, presented at the height of the Aids crisis for added frisson, are all that one might expect from the film-maker who put nipples on the Batsuit: brooding, pouting, big-haired. Kiefer looks at Jason the way Ethan Edwards looks at Debbie in The Searchers. One can’t tell if he wants to kill him or kiss him. Or rather kiss him and then cut away to 1980s PG-13 saxophone-tracked sheet-grasping.

A fine vintage cheese re-issued for Valentine’s Day. No wonder the film heralded a minor vogue for such lite-goth teen classics as Beetlejuice and The Craft.