Talking About Trees: How Sudanese cinema withered on the vine 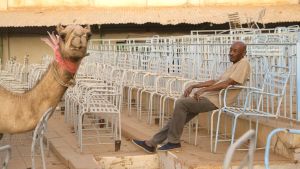 There is a power cut across the area and, as the Sudanese Film Club – comprising a group of directors: Ibrahim Shaddad, Manar Al Hilo, Suliman Mohamed Ibrahim and Altayeb Mahdi – contact the call centre, they are told that they are number 175 in the queue. They don’t sound convinced.

Thus, with their movie-viewing plans cancelled for the evening, they re-enact the iconic “close-up” scene from Sunset Boulevard. They do a decent job, too. And unsurprisingly too. Throughout this lovely, warm film we see clips from their work as filmmakers: the remarkable crosscuts and sound design of Hunting Party by Ibrahim Shaddad (1967), or an extraordinary clatter of camel legs from The Station (1968), or the thrilling polemic and extraordinary composition of Africa, the Jungle, Drums and Revolution (1979).

These directors, all heavily influenced by Soviet montage and the nouvelle vague, won major international prizes. Shaddad’s The Rope won the Damascus Festival in 1987; Ibrahim’s And the Earth Still Turns won at Moscow in 1979; Mahdi’s The Tomb won Best Short Film in at Cairo in 1970; and Al Hiro’s The Grave won the top prize in Cairo in 1973. And then they were retired. Not by choice.

A radio talk show broaching the same topic and included as part of this documentary is called Sudanese Cinema: The Hero That Died.

Gasmelbari’s Talking About Trees chronicles the actions of the former directors, as they rifle through old 16mm and lost and uncompleted projects and attempt to reopen a cinema in the city of Omdourman, located just outside of Khartoum. In a country dominated by Islamists, this proves to be a desperate mission. Their makeshift projections of Chaplin are, nonetheless, indescribably moving and sound a happy note across a grim landscape.

In recent days, we have learned that the former Sudanese dictator Omar al-Bashir may face the International Criminal Court, news that makes this sad snapshot of life under the last days of his regime all the more poignant.