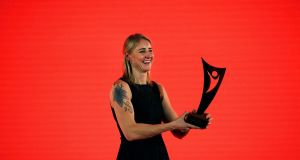 “You don’t have to add any years on me today,” pleaded Sanita Puspure, who turns 38 on Saturday.

The double world champion rower, who beat a competitive field to win the 2019 Irish Times/Sport Ireland Sportswoman of the year award, now faces into a pressure-filled 2020 Olympic year with all eyes on her.

Puspure, who successfully defended her world title in Austria earlier this year, beat off soccer, hockey, Gaelic games, golf, swimming, athletics, boxing and horse racing to take rowing into the winner’s enclosure for the first time.

After taking three years out of rowing while she was pregnant with her now 12-year-old son Patrick and 11-year-old daughter Daniela, Puspure took a wrong turn at Dublin Zoo and found herself driving down to the river Liffey where rowers were on the water.

That happenstance triggered her to get back into the sport she excelled in at underage level in her native Latvia. Now she is one of Ireland’s solid hopes in the single sculls in Tokyo.

“Unfortunately I didn’t write down the date when it happened, but yeah it was September and I was heavily pregnant with my second child,” she says. “Instead of going up to the zoo we missed the turn and went to Islandbridge and we saw all the rowers in the boat and I instantly decided I’m going back.

“If I hadn’t had that wrong turn going to the zoo I wouldn’t be here. That led me back to the sport in Ireland and I’m ever grateful for that opportunity to achieve what I have.”

Puspure’s win also arrived as Sport Ireland announced greater support for women athletes who take time out to have children. Puspure took her time away from the sport to do just that between 2005 and 2008.

“I suppose I had kids earlier on. I think the new policy that comes in now with Sport Ireland is amazing. I think a lot of women should not shy away from having families and then going back to sport. I think in training age, I’m way behind my biological age. I’m more mature, I can enjoy my success a little bit better and I have my family.”

The Cork resident also spoke of her history, coming from a different European country and resettling in Ireland and now earning recognition as an Irish woman winning a national award.

“You say it doesn’t matter but actually it does matter especially for me coming from a different country,” said Puspure. “I feel more accepted. I never really felt unaccepted. But it just makes you feel more recognised and valued if that’s the word.”

Puspure’s successful World Championships defence also came in a year where she took time out to return to Latvia to be with her ill sister Inese who tragically passed away. The challenge of dealing with the grief as well as the more pragmatic side of missing training before such an important event gave her a focus and mental strength that has been getting better and better.

“It was really challenging,” she concedes. “As an athlete you have to devote so much time to training. I had a lot of mixed feelings about being there with my sister for that time and wanting to train.

“But this was a time to put the family first it’s just what I had to do. I was lucky enough to have a lot of help as well. The sport combined with the team helped me through the tough patch.”

But going into an Olympic year after two world wins brings its own pressures. “Yeah, tell me about it,” she says. Her plan is get through the winter without injury and to stay in good health, as well as taking care of the physiology and the technical aspects of rowing.

The Irish indoor championships take place in January in Limerick, which will come after an Irish training camp in Italy. Then there are selection trials in February. Like sailing it is the boat not the athlete that qualifies for the Olympic Games. The final trials are in March and that’s when the announcement of the crews for the boats will take place.

Puspure will compete in two World Cup events and maybe the European Championships before Japan in July.

“So I still have to prove myself,” she says of selection. “It is more pressure but I think a little bit of pressure drives you. Have I done the best I can today? It gets exhausting at times but you need that to keep you on the right track.

“I will be racing the same girls I’ve raced for years and I know them all. It’s exciting, a bit scary because I have been waiting to make amends at the Olympics since Rio. Yeah, very excited.”