Ireland forced to cancel planned Bangladesh Test due to finances 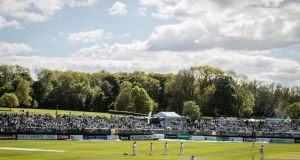 Ireland have been forced to cancel their planned home Test match against Bangladesh next summer as well as the T20 series against Afghanistan due to “significant financial challenges”.

The meeting with Bangladesh has now been changed to a T20 international with the organisation saying that the expected cost of hosting a Test match, which is around about €1 million, proving to be too much in a year when the focus will be more on white ball cricket ahead of consecutive T20 World Cups, in 2020 and 2021, and the start of qualification for the 2023 50-over World Cup.

Cricket Ireland chief executive Warren Deutrom said in a lengthy statement on Monday that Ireland had suffered a shortfall in their expected funding allocation from the ICC, and had been required to make “tough decisions” about their commitments for 2020.

“The first area of prioritisation for 2020, has been white ball cricket over red ball,” Deutrom said. “Like all Irish cricket fans, we would love nothing more than to be competing on all three fronts – Tests, ODIs and T20Is. Unfortunately, our financial constraints have led us to cut the home Test match next year.

“As the Test does not form part of the World Test Championship, the one-off match lacks context. For effectively a ‘friendly’, the expected costs for hosting the Test would be over €1 million, with little expectation of creating revenue streams to cover the costs of hosting.”

As well as the T20 series with Bangladesh, Ireland will also host T20 series against New Zealand and Pakistan next summer.

Deutrom went on to say that the future doesn’t look too positive on the financial side either with the funding shortfall expected to continue until 2023.

“With an allocation amounting to less than half of that of Zimbabwe, our expected revenues from the ICC Funding Model for Full Members have not been realised,” Deutrom said. “Although we generate a higher percentage of our own income outside of ICC funding than a number of more established nations, the fact is that it is insufficient to help us transition smoothly to our current status.

“This has been a great disappointment to us as we had hoped to have had an injection of new money into the sport from Full Membership that would have not only helped fulfil fixtures, but invest in infrastructure and the grassroots game across Ireland. We have been told that this expected shortfall is set to continue until 2023 when a new ICC Funding Model will be developed that will hopefully provide a greater share of the overall allocation, although of course that is still subject to discussion among all the members.”