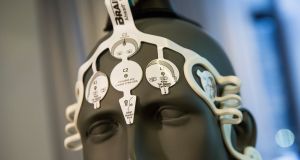 BrainScope’s new device that could potentially be used to diagnose traumatic brain injuries in the field. Photograph: Andrew Burton/Getty Images

A US tech company has launched what they believe is a revolutionary device that can carry out measurements in the brain and allow clinicians to rapidly diagnose concussion. The process can take anywhere from between 10 and 30 minutes.

BrainScope has developed a hand-held unit that it believes will change the way concussion is diagnosed for players who are injured in contact sports.

Cleared by the US Food and Drug Administration (FDA) in September last year, the Ahead 300 device can be used to help doctors provide an objective pitch-side assessment of head injuries.

The device features patent-protected electroencephalography (EEG) capabilities and uses algorithms and machine learning to provide a comprehensive panel of results.

“We have created this capability, where there are elements that may already be used by clinicians and we put those on the device in digitised format,” said company CEO Michael Singer.

“Then, in addition to that, we add capabilities that are particularly new.”

The equipment has been developed in partnership with the US Department of Defence (DOD) and has taken eight years of research including over 20 clinical studies at 55 sites. It has also been the subject of 16 peer-reviewed publications.

It was launched earlier this month to limited American outlets, including the US Military and professional sports organisations, with a view to coming to the wider market later this year. Funding for the project has come from, among others, the American military and the National Football League (NFL), where concussion has become a serious and highly litigious issue.

“We do see it as a quite transformative product,” said Mr Singer. “We feel that what is really missing is an objective capability. The clinician finally has that to help them make this very difficult clinical diagnosis.

“It is a hand-held medical device. We use a militarised smartphone and we load onto the smartphone very specific smartware and algorithms.

“It can be used in any venue where head injury occurs. For the military, it could be in the theatre of war. If it were sport, it would probably be a locker room, where it’s quiet rather than being a spectacle.”

The device, which has inbuilt sensors and is connected to the phone, is placed on the head and includes four objective tests and 16 standard concussion assessment tools, with results formatted in an easy-to-read manner.

Early last year, BrainScope was among a handful of companies featured at the NFL’s annual meeting as part of its “Vision 20/20 Tech Lab”.

It was the grand prize winner of the Head Health Challenge I, part of a collaboration between NFL, General Electric, and Under Armour aimed at developing better diagnostic technologies for traumatic brain injury.

Leslie Prichep, the chief scientific officer for BrainScope, told Massachusetts Institute of Technology Review that over the last 10 years or so “our ability to characterise electrical signals has just exploded”.

In rugby there is a time period of 10 minutes for the current and controversial head injury assessment (HIA), which many doctors believe has allowed concussed players to return to play. Incidents involving Munster and Ireland scrumhalf Conor Murray and Welsh winger George North are two recent examples where questions were asked about the testing methods employed, with team doctors coming under undue and unfair pressure.

“The core feedback that we are getting is that they love the objectivity because there is nothing objective out there today that can be used for mild head injury to help the clinician assess concussion,” added Mr Singer.

“The only tool out there today that is objective for a head injury is the use of a CT scan, which helps determine if someone has an underlying bleed or not. What a CT does not do is, it does not provide any help to the clinician for concussion. What we offer objectively, using EEG, has been particularly well received.”

Commercial cost for the unit has not yet been established.

“This is a brand new product, a pioneering product,” added Mr Singer. “There’s a group of core clinical sites, all in the US that we are beginning with, hospitals, sport and some others.”

1 A kick in the teeth for sports, and a nail in the coffin for communities
2 What next for green jersey hero Sam Bennett after toughest of Tours?
3 Awarding of 2023 Rugby World Cup to France part of Laporte investigation
4 West Ham boss David Moyes tests positive for coronavirus ahead of Hull game
5 The Offload: Saracens prove Pro14 is not fit for purpose
Real news has value SUBSCRIBE
Here is your handy guide to sport on television this week