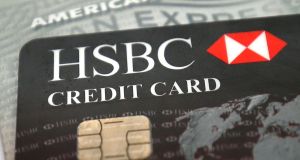 Gamblers in the UK will no longer be able to use their credit cards to place bets online from April 14th. Photograph: Philip Toscano/PA Wire

The United Kingdom’s 24 million gamblers will no longer be able to use credit cards to place bets under the latest move to tackle problem gambling.

Less than a year after the British government slashed the maximum stake that can be placed on popular fixed-odds betting terminals, it said on Tuesday it would ban gamblers from using credit cards to bet online or offline to rack up debt.

According to trade body UK Finance, around 800,000 people use credit cards to gamble. The Gambling Commission believes a quarter of those are problem gamblers – people who are addicted to gambling to try and win back their losses.

“The ban that we have announced today should minimise the risks of harm to consumers from gambling with money they do not have.”

Shares of betting companies including 888 Holdings, Flutter Entertainment – which includes Paddy Power and Betfair – and William Hill dropped in early trading, before recovering by late morning.

UK culture minister Helen Whately said there was clear evidence of harm from consumers betting with money they don’t have.

“We will not hesitate to take any further action necessary to protect people from gambling harm,” she said in a statement.

But the government has sought to tighten rules in recent years by capping the maximum stake on terminals, bringing in tighter age and identity checks for online gambling and expanding support for those who become addicted.

The new ban will come into effect on April 14th and apply to all online and offline gambling products apart from over-the-counter lottery tickets.

“The latest in a recent series of more onerous regulatory changes, it also acts as a further reminder that the UK opportunity is no longer what it once was,” it said in a note to clients. “However, it remains a very large, [still] growing and highly cash generative market for online gaming operators.”

Britons had a total of £72.1 billion (€84 billion) outstanding on credit cards in November, according to Bank of England data.

No such measures have been proposed here in the Republic, although the Gaming and Lotteries (Amendment) Bill 2019 provides for the establishment of an independent regulatory authority that will be tasked with licensing and regulating all offline and online gambling activities in Ireland.