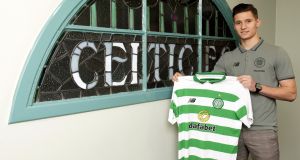 Celtic have clinched the signing of Poland under-21 striker Patryk Klimala on a four-and-a-half year contract, the Scottish champions have announced.

The Hoops have paid a reported €4 million to secure the 21-year-old from Polish top flight side Jagiellonia Bialystok, where he has scored seven goals in 17 league appearances so far this season.

Kimala flew into Glasgow late on Sunday night to put the finishing touches on his move before undergoing a medical. He will now meet up with Neil Lennon’s squad for the first time on Wednesday ahead of his official unveiling and could make his debut in Saturday’s Scottish Cup clash away to Partick Thistle.

Klimala told the Celtic website: “It’s a big moment for me and I’m very excited. I’m very happy to be here at such a massive club.

“The last 24 hours were intense. I was waiting for the decision to be finalised so I could finally come here and meet everyone.

“I had the chance to see the stadium and I felt the atmosphere. It was amazing so I’m looking forward to playing here in front of the fans. I’m very happy that everything is finished now and looking good.”

Klimala started his career with his local club Lechia Dzierzoniow but an unhappy spell at Legia Warsaw’s academy ended with him being released.

However, he proved his potential after moving to Bialystok and insists he is ready for the challenge of playing for Celtic.

“I understand how massive a club Celtic is, but I feel I’m ready for this now,” said Klimala.

“I’m looking forward to playing for a club with such a big history and I know Celtic are a huge club in Europe. I want to give fans a lot of happiness and hopefully score a lot of goals for Celtic.”

1 Welcome to Iten in Kenya – home of champions and cheats
2 Saracens to accept second 35-point deduction and effective relegation
3 How do Klopp’s Liverpool measure up against greats of past?
4 TJ Reid reveals the fresh secrets of his consistency
5 Sonia O’Sullivan: How did Melbourne become the world’s most polluted city?
Real news has value SUBSCRIBE
Crossword Get access to over 6,000 interactive crosswords