TV View: Sky gets its teeth into non-penalty incident 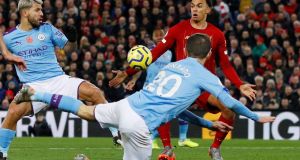 The controversial incident in which Liverpool’s Trent Alexander-Arnold appears to handle the ball in the penalty area. Photograph: Phil Noble/Reuters

Those antiquated enough to recall the occasion Newsnight host Jeremy Paxman, taking “a-dog-with-a-bone” to a whole new level, asked Michael Howard the same question 12 times in 90 seconds, never once getting the response he was seeking, might have felt like they’d been transported back in time on Sunday when Geoff Shreeves had his post-match chat with Pep Guardiola.

By then, Sky had shown us so many replays of that non-penalty incident, we’ll be seeing Trent Alexander-Arnold’s outstretched right arm in our dreams. And despite the pleadings of Roy Keane and José Mourinho, they persisted with the debate about Trent Alexander-Arnold’s outstretched right arm like, well, a dog with a bone, to the point where Liverpool’s disturbingly impressive display barely got a mention.

“It’s frustrating that we end up talking about that rather than a brilliant game of football,” said Roy to David Jones.

David nodded and then turned to Jose to ask him about the non-penalty incident.

“The game was so good, there is so much to speak about it that I think enough is enough,” he said of the non-penalty incident.

So, David handed over to Geoff who asked Pep about the non-penalty incident so often that Michael Howard, no doubt watching back home, might have thought he got off lightly, Pep deflecting the enquiries on each occasion by insisting that he was monumentally proud of his team, despite the fact that they had defended like San Marino.

Pep, of course, is a sumptuously sore loser, at times even making José look magnanimous in defeat, and when he approached the officials after the game, saying “thank you SO much”, he shook their hands so tightly they possibly needed reconstructive surgery.

While he simmered during his chat with Geoff, he just about held it together, even resisting calling his hosts Livarpool, but Geoff was so preoccupied with the non-penalty incident he neglected to ask Pep why, having spent almost €800 million on players since he arrived at City, even allowing for Laporte’s injury, he still could only field a back four of Walker, Stones, Fernandinho and Angelino, which sounds a little like a pop combo representing Sweden in the Eurovision Song Contest.

Back in the studio, David was still harping on about the non-penalty incident and the naturalness or otherwise of the positioning of Trent Alexander-Arnold’s body parts, at which point you half expected him to whip out his copy of the Kama Sutra.

Vincent Kompany, sounding quite like an MCFC company man, was more than happy to prolong the debate, but Roy, José and Graeme Souness had the look of men close enough to nodding off.

Roy looked especially weary. “We all know this game doesn’t need any build- up,” he’d said at 1:08 while Sky’s countdown clock in the bottom right corner of the screen was showing there were still three hours and 22 minutes to kick-off. There was a heap of building up to be done, then, Wolves v Villa only providing 90ish minutes of a break. And even during it, Sky cut away to show us the coaches arriving at Anfield, like it was FA Cup final day in 1976.

Graeme was, though, tingling. “These are two unique teams we have at the moment,” he said, which . . . ah look, never mind.

What everyone needed come the end of a long day was the perfect ham sandwich. And it’s only four years since this here parish made a video of Micheál Ó Muircheartaigh demonstrating how to make that very thing.

Remember? He viewed his slices of bread like they were football pitches, warning us not to spread the butter on to the sidelines. He placed his sliced tomatoes on the ham “like the team would line out, not too near each other”, and wanted his lettuce “protruding”, because it reminded him of all those green pitches he had stood around in his youth. And he recoiled at the idea of “securing” the ingredients between the slices by “putting any sort of substance to stick them together”, his fatwa against mayonnaise unveiled. As for “the modern idea of making two triangles” out of the ham sandwich? Repent. “Bread was never meant to be triangular, it was meant to be square, like a good field.”

What happened with that video? It only went viral in the last few weeks, as Ryan Tubridy told Micheál when he turned up on Friday’s Late Late.

“It’s been put up on an ASMR website – ASMR is ‘autonomous sensory meridian response’. Do you know what that is? It’s not sexual.”

Micheál beamed, enough to trigger an autonomous sensory meridian response in all of us.

“It was a hell of a good sandwich,” he smiled.