There wasn’t a potted plant there to celebrate, never mind excessive heavy breathing 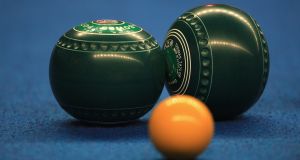 Lest we’d missed it, the BBC’s Rishi Persad had bad news for us on Saturday, there would only be one semi-final at the World Bowls Championships because both Wayne Willgress and Perry Martin had tested positive for Covid-19, so their quarter-final had to be cancelled. And then they previewed the surviving semi-final with a montage set to Thunderclap Newman’s ‘Something In The Air’. They did, honest.

No more than every other sporting event, there’d been doubts about whether the tournament could go ahead, but John Potter, the managing director of the Potters Resort venue in Norfolk, had insisted that it could be staged safely, not least because bowls doesn’t feature “too much excessive heavy breathing”.

There was certainly no excessive heavy breathing coming from the spectators because there weren’t any, just a few potted plants placed where they’d have been seated, but that didn’t mean Greg Harlow or David Gourlay entered the arena to silence, bowls deciding that if other sports can have fake crowd sounds, why can’t they?

Greg and David, then, looked pumped when they arrived to the cheering, even taking the time to wave at the potted plants.

Not to be too critical, but it took the fake-crowd-sound-operator a while to get the hang of it, his three choices (1) a gentle ripple of applause, (2) loud ooooooohs and (3) thunderous applause.

At one point, Greg sent the jack in to the middle of next week, as he had hoped to do, and there was just a gentle ripple of applause, but that ended abruptly, like a needle being dragged screaming across vinyl, and was replaced by thunderous applause, the fake-crowd-sound-operator belatedly realising that that was the more appropriate reaction for a bowl that would have had the crowd breathing excessively heavily if there had been a crowd.

But you have to doff your cap to them for putting on a mighty decent tournament despite the fact that no overseas players were allowed enter and the world number one Nick Brett was absent. He’d taken up golf to pass the time while he couldn’t play bowls, then fell over leaving a green and broke his right hand. Gutted? “Gutted.”

Nick, you might recall, became a bit of a mega star a year ago when half the planet retweeted his jaw-dropping millimetre-perfect bowl from the 2020 World Championships, a moment that Rishi reminded David ‘Corky’ Corkill brought the sport to a wider audience and would have helped lower the age profile of its participants.

This annoyed Corky a bit, him arguing that bowls has always attracted young competitors, it’s just that when the media visit bowling clubs they do so in the afternoon, “so the only people there are retired”. That was Rishi told. And the media too.

Any way, Greg prevailed in his semi-final and so took on Mark Dawes in Sunday’s final, the BBC preview montage for which was accompanied by REO Speedwagon’s ‘I Can’t Fight This Feeling’ over slo-mo shots of Greg and Mark in action. It was quite something, especially when it came to “it’s time to bring this ship in to the shore, and throw away the oars foreveeeeeeeer”.

After sanitising their bowls, off they went, Dawsie throwing away his oars to win his second world indoor singles title in four years. Greg was magnanimous in defeat, if a little down. As Jurgen Klopp told the BBC ahead of the FA Cup game at Old Trafford, “confidence is like a small flower - and then someone steps on it”. “Have you been watering it,” asked Kelly Somers. Jurgen pointed out, not unreasonably, that in Britain’s climate, there was no need.

Just time for a quick pre-match Gary Lineker chat with Bruno Fernandes on the first anniversary of him gracing English football with his presence. What was the main reason behind him moving to England? “For the full stadiums and the atmosphere.” Poor lad.

So, when he scored the winner, there wasn’t even a potted plant there to celebrate, never mind excessive heavy breathing. Although, if you listened hard enough, you’d swear you could hear the Stretford End croon in Bruno’s direction ..... “you’re a candle in the window on a cold, dark winter’s night”.