TV View: Mark Wright from The Only Way Is Essex came on against Leeds United 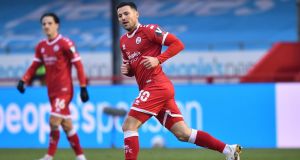 It was that moment that Mark Wright from The Only Way Is Essex left the Crawley Town bench to come on in injury time in their game against Leeds United that the folk who argue that the FA Cup isn’t magic any more were well and truly silenced.

“Has there ever been as much publicity for a 33-year-old debutant,” asked Jonathan Pearce, Martin Keown, his colleague in the BBC commentary box, way too polite to point out that Jonathan had done little but talk about Wrightie since their coverage of the game got under way, barely noticing that Crawley had gone 3-0 up.

For those not familiar with Wrightie (or Towie), he was the fella, the Chigwell Casanova, who bowled the ladies over with irresistible chat-up lines like “did it hurt when you fell from heaven?”All of which worked a treat because he ended up with as many girlfriends as there are players in the Crawley squad.

Since leaving Towie, Wrightie has branched out, developing a varied broadcasting career and even appearing on Who Do You Think You Are? You might recall him learning that his nine-times great grandfather was tortured for two years during the Spanish Inquisition having been accused of secretly practising his ancestors’ Sephardic Jewish faith. “Bloody ’ell,” said Wrightie, although he possibly still reckoned his treatment at the hands of the tabloids was harsher, him being dubbed a love rat and all.

Any way, having been a useful footballer in his youth, things just not working out, he joined Crawley last month for one last hurrah, and here he was, playing three minutes of their giant-slaying third round tie.

The game nearly never happened, mind, Jonathan telling us that the fog had been so thick the night before, he thought it might be postponed. “Credit to the groundsman for getting it on,” said Martin, crediting the groundsman for altering the weather.

Our presenter Mark Chapman showed us a photo of Leeds diehard Colin Montgomerie sitting on his Marcelo Biesla bucket in front of his telly back home, but you’d guess when the third goal went in, he fell off it.

“It’s the FA Cup, it just keeps on giving,” said Martin who – and credit that is rarely given to the fella is richly deserved here - had earned himself The Man of the Round gong for his co-commentating efforts in Friday’s game between Aston Villa and Liverpool.

“Many of them are so young, their mums and dads will be dropping them off at Villa Park tonight,” Aston Villa chief executive Christian Purslow told BT Sport after Villa had to name a team comprised solely of under-23 and under-18 players – average age 18 years and 294 days – because a Covid outbreak at the training ground had ruled out the entire first team squad.

Somewhat unkindly, Jake Humphrey pointed out that five of their starting XI weren’t even born when James Milner made his FA Cup debut.

This situation, then, meant that Martin was as familiar with the Villa team as he would be with, say, Wrightie’s chat-up lines, but he handled the challenge expertly, simply referring to each of them as “that young man”.

Mind you, he seemed to lose concentration at one point, noting that “Villa will be hoping to keep this at 3-1”, 14 minutes after Liverpool had scored their fourth.

There was no romance either when Marine hosted Spurs, Jason McAteer reminiscing pre-match about his spell with the Merseyside club before he moved to Bolton, the transfer fee “500 quid and a bag of balls”. Gary Lineker reckoned that might be all Marine captain Niall Cummins is worth after a team-mate described him as “Harry Kane without the pace or shooting ability”.

Still, though, he was chuffed to tell us that the Marine side featured the obligatory bin-man and trainee plumber, so the magic of the Cup lives on. They had no Towie star to bring on from the bench, though, so they suffered a bit of a tonking. Dream over, and their fall from FA Cup heaven most probably hurt.