We were promised goals galore by Sky, maybe they’ll come next week in the FA Cup 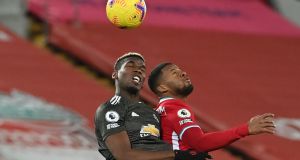 One of these days someone will report Sky to the Advertising Standards Authority for always promising that meetings between Liverpool and Manchester United will be scintillating. So scintillating, in fact, that you’d be half thinking after the latest one, we’d be sitting our great grandchildren on our knees in the decades to come and telling them ‘I was there (on my couch) on January 17th in the Year of our Lord, 2021’.

Not such a Sizzlingly Stupendous Super Sunday after all.

“Well,” said an unapologetic David Jones come full-time, “it was certainly better than some of the goalless draws we witnessed between these sides in recent seasons – that’s three in five at Anfield, and four of the last nine overall.”

Funny, he didn’t remind us of that stat before the game, instead suggesting that the contest was pitting two of the best attacks in the history of Association Football against a United defence featuring Victor Lindelof and a Liverpool rearguard that featured no natural centre halves at all, thereby guaranteeing us a 3-3 draw at the very least.

On top of that, to add to the intrigue, Liverpool were aiming to knock United off their [blankety-blank] perch, although, granted, it’s a perch they’d only been sitting atop for four days, so Jürgen Klopp’s task wasn’t quite of the same magnitude as the one Sir Fergie faced back in the day.

Still, the gist was that if United could win, this might prove to an epoch-shifting afternoon. With only 20 games to go after the Anfield ding-dong, a six-point lead would have United with one hand on the trophy, sort of making Liverpool the Donald Trump of the Premier League – lame ducks.

That class of talk, Roy Keane, reckoned, was a little bit previous, 20 games being quite a lot, so when he looked at United he didn’t think ‘Joe Biden! ’ And lest David de Gea thought Roy had forgotten about him . . . “I’m still worried about the ’keeper.”

Graeme Souness tried to counter with the suggestion that this was a “make-shift” Liverpool team, which it was if you didn’t count Allison, Alexander-Arnold, Fabinho, Henderson, Robertson, Thiago, Wijnaldum, Salah, Firmino and Mane, although Roy was sufficiently buoyed by the locating of Fabinho and Henderson at the heart of the Liverpool defence to conclude that United might have half a chance.

Warm-up time and the Liverpool DJ chose to blast Enola Gay through the speakers, that tune by Liverpool beat combo Orchestral Manoeuvres in the Dark about the plane that dropped an atomic bomb on Hiroshima. Somehow, Takumi Minamino carried on warming up, possibly unfamiliar with the tune, otherwise he might have asked the DJ, ‘are you having a laugh?’

First half. Firmino had almost as many chances as United had offsides, United coming closest through a Fernandes free-kick. “His strike was perfect,” said Gary Neville, “it was just the accuracy”. Jamie Carragher somehow stifled his giggles, while Martin Tyler ignored the lack of incidents of note to insist that this was “a colossus of a Premier League game”.

Roy was content, though, at half-time, apart from when Micah Richards tried to metaphorically slap his knee in a bants kind of way, while Graeme’s cheek muscles flexed in awe at a make-shift Liverpool surviving having only 70-plus per cent of the possession.

Second half and Lindelof resembled Franz Beckenbauer and Luke Shaw was man-of-the-match, proving that everything we ever thought we knew was wrong.

No goals, so there was no need for the players to practice their socially-distanced score celebrations, the closest we came that late Paul Pogba effort. Or, as Roy put it, “OH MY GOODNESS POGBA,” in that exasperated Corkonian high-pitched thing he does when he’s at a loss to understand why a footballer missed when it was easier to score.

For the first time this season, Ole Gunnar Solskjær resisted saying the performance was “fantastick” when he spoke to Geoff Shreeves, instead conceding that his lads didn’t deserve to win because they hadn’t played well enough, while Jürgen, for the first time this season, almost came over as less whiny than Jose Mourinho, but that’s probably only because United weren’t awarded a penalty.

Another goalless draw, then, making Sizzlingly Stupendous Super Sunday not so Scintillating. Less than a week to go before their next meeting, in the fourth round of the FA Cup. Maybe that one will be worth telling the great grandchildren about. If it’s 0-0 and settled on penalties, at least it’ll send them asleep.