Tiger Woods miracle gets even cynical Alliss a bit emotional

TV View: As ‘one of the greatest sporting stories ever told’ unfolded, Peter gave in 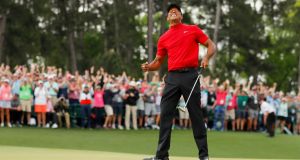 Tiger Woods celebrates after sinking his putt on the 18th green to win the Masters at Augusta. Photograph: Kevin C Cox/Getty

Pádraig Harrington just shook his head in a disbelieving kind of way, close to being lost for words to describe what he had just witnessed in Augusta. Time and time and time and time again, he said, he and his fellow pros had been asked over the years if Tiger would ever win a Major again. Most said no, he told us, but “even if you said yes, you were being polite, just trying to be nice”.

Paul Azinger smiled. “He went from being the most revered athlete on earth to being the butt of jokes on late-night TV,” he recalled. The lowest point, he reckoned, was that mug shot from October 2017 when Woods had been arrested on suspicion of driving under the influence. There was, he believed, no coming back from there.

Those of us hoping for some variety in the end-of-year choices for the sporting moment of 2019 are banjaxed. Not since the results of any election involving Robert Mugabe will there have been a greater consensus.

Cripes, even Peter Alliss got a little bit emotional.

Up until the moment Tiger hugged his kids, Alliss had been just a touch cynical about it all. “Do you think if he wins will he start to cry, will he sob and collapse in to the arms of his caddy?” he asked his BBC colleague Andrew Cotter, offering him odds on the likelihood of Tiger shedding a tear. By then Andrew sounded like a man who wanted to shove a bunch of Augusta Azaleas in to Peter’s gob to quieten him. “Some in the crowd will start to cry; it’s a grand old story,” he said. “One of the greatest sporting stories ever told.”

Peter, a little grudgingly, agreed. “Fan or not, you have to admire him,” he said, and you’d have been left guessing he fell in to the ‘not’ category, his chief gripe being that Tiger doesn’t smile when he’s targeting a triumph. (Although the absence of a beam on Francesco Molinari’s face while attempting to do the same didn’t appear to trouble him half as much.)

“All the drama, all the stories, all the tales, all the operations, all the bits and pieces – can this really be happening?” he asked, and indeed it was. Apart from a little balding, it was 1997 all over again. Or maybe not. “So similar to the scenes in 1997, but a lifetime away,” said Andrew.

It had been all to play for until that tee shot at the 16th, and while it might not have been quite chip-at-the-16th-in-2005 standard, it was still enough for Peter to seek medical assistance. “Oh my God! Where are my pills? Doctor! My pills!”

Peter will be 89 next February and there was a spell just around teatime on Sunday when he must have wondered if he would get back to Surrey in time to celebrate his birthday, by then the ominous orange bits on the weather map “tip-toeing closer like the Day of the Triffids”, as he put it, while at least 10 players were still in contention, leaving us facing the prospect of the mother of all play-offs.

And just to add to the challenging nature of Peter’s day, the world No 10 was among those in contention. “Xander … She-fell … I’m not quite sure how you pronounce that. I want to say souffle all the time, but that’s not right.”

Alas for Peter, Souffle, aka Schauffele, refused to drift off the first page of leaders, so he opted to call him “Xander” or “he”, which was best.

“The years go by and your thoughts get more direct … can I do it? You push those thoughts to one side,” he said of Tiger, when he might well have been talking about himself. How many times have we marked the retirement of the Jacob Rees-Mogg of golf commentary only for him to return? In that sense he’s a bit like Tiger – write him off at your peril.

Peter, though, wasn’t the chief reason to opt for the BBC over Sky at the weekend. While Sky armed themselves with more fancy gadgetry than you’d find in Nasa HQ, the Beeb contented themselves with Ken Brown waving an upside-down wok in the air to demonstrate the trickiness of the greens. Meantime, over on Sky, Butch Harmon was being CGIed on to the fairways, while Paul McGinley became the channel’s Scotty on the Starship Enterprise, his mission to transport us in to Souffle’s shoes when he lined up a putt.

Tiger? “Business as usual,” said Pádraig. A major welcome back. Best Reeling in the Years episode ever.

Ireland boss Stephen Kenny: ‘I’ll do things my own way. Put it that way’ 06:00
Mickey Graham calls for some clarity from GAA on championship plans 06:00
Whole new ball game: Hats, scarves, facemasks - An Ulster final like no other 06:00
Damian Browne: To the ends of the Earth in search of the ‘savage warrior spirit’ 06:00
My favourite sporting moment: When Ireland rocked Kingston and rolled Pakistan 06:00