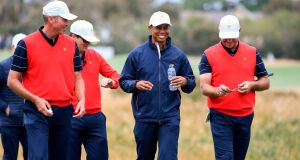 US team captain Tiger Woods with teammates Matt Kuchar and Gary Woodland during a practice round ahead of the Presidents Cup. Photograph: Getty Images

Before he took aim at a makeshift target floating on the Yarra River, Shane Luke, an accomplished disabled golfer, glanced up at Tiger Woods, whom he knew only from television. Luke was one of the local stars participating in the made-for-TV kickoff event at the Crown Riverwalk ahead of the 13th edition of the Presidents Cup. Faced with his big moment in front of the crowd, and his one shot at connecting with Woods, Luke decided to go for broke.

“Will you hold my leg for me?” Luke asked Woods. Luke, a nine-time Australian Amputee Open champion, removed his right prosthetic limb and handed it to a surprised Woods. “It’s really heavy,” he warned. Woods smiled and replied, “I’ve got it.” Balancing on his left leg, Luke hit a wedge shot that landed on the improvised green as Woods watched intently, leaning on the prosthetic leg as if it were his putter. “Obviously it was good of him even to do it,” Luke said, calling it “the favorite moment of my life.”

“He could have said, ‘No, I’m not touching that!’ It was meant to be a bit of fun and to get a bit of a reaction from the crowd, a few claps and cheers, that’s all. But who knows what his reaction would be?” This is not the first time that Australians are seeing Woods, the playing captain of the US team, but it is as if they are seeing him with fresh eyes.

Woods represented the United States in each of the two previous Presidents Cups held at Royal Melbourne Golf Club, in 1998 and 2011, and he won the Australian Masters in 2009 in his only other competitive appearance as a pro in Australia. This year’s installment starts Thursday with a four-ball session.

Adam Scott, a former world No 1 from Adelaide, recently challenged Australia’s sports-crazed public to refrain from rooting for Woods and to instead support the underdog Internationals, which counts three Australian team members. But Scott might as well have been spitting into the wind that regularly buffets Melbourne.

The biennial competition is most likely the last professional playing appearance on Australian soil for Woods, who is in the midst of a career renaissance after resorting to spinal fusion surgery in 2017 to try to improve his quality of life.

If Woods is not exactly on an extended farewell tour like another icon, Elton John, who is also in town this week to perform, signs abound that he is playing on borrowed time.

Monday’s exhibition started a few hours after Woods and the rest of the US team arrived following a 29-hour journey from the Bahamas. Hitting in jeans, without the benefit of a warm-up, a stiff and sleep-deprived Woods deposited both of his shots in the river, with swings that called to mind mechanical arms in need of oiling.

The next morning, Woods looked only slightly revived. Playing a practice round that started in a cold mist and ended in a crisp wind, Woods on occasion hopped in a cart to get from shot to shot to preserve his energy and, presumably, his back.

The days are long gone when Woods can count on his body bending to his will. Woods, who turns 44 at the end of the month, raised his hand to captain this year’s US team at a time when his competitive playing career appeared done, or at least in the gloaming. In 2017, five months after his fourth back surgery and four months removed from a DUI arrest stemming from the use of prescribed painkillers, Woods resurfaced to serve as an assistant captain for the United States’ winning Presidents Cup team.

Working with younger players like Justin Thomas and Patrick Reed had a salutary effect on Woods, who described as “uplifting” their subsequent enthusiastic support of his comeback. Shortly after returning home from the event at Liberty National, Woods reached out to Jay Monahan, the PGA Tour commissioner, to take him up on his offer of the captaincy of the next Presidents Cup team for the United States. Woods figured that the next logical step in his career would be serving as a guide for the next generation.

When Woods made that phone call to Monahan, he had no realistic expectation of Woods the captain picking Woods the player to fill out this year’s 12-man team. “I was just getting started with my comeback, and next thing you know I’ve won three tournaments since then,” Woods said Tuesday with a Cheshire cat grin. “It was nice to earn a pick from the captain.”

The run that Woods is on, spanning 16 starts and three titles, including his 15th major, evokes the Tiger of old. At the same time, Woods seems different in ways that people can’t quite pinpoint. One Presidents Cup volunteer walking with Woods’ foursome Tuesday said: “Has he lost weight? He looks a lot thinner.”

Woods does carry himself these days with a palpable lightness. During a stopover in Australia last December to promote this event, he dropped the game face that he had worn like a mask for the better part of two decades. “You know, 20 years ago it was a totally different deal. I was trying to just play and compete and beat everyone,” Woods said during a news conference. “Now I’m appreciative of having the opportunity to come back and play again. I’m just so thankful to be part of the game of golf as a competitor again.”

He was also grateful for the support of the fans. “They’ve been so great and so into it, and I think that was the culmination of all this anxiety and just all this anxiousness about my comeback,” Woods added.

One of the first fans to arrive for Monday’s river walk event was David Ku, a local pharmacist who showed up 90 minutes before the scheduled start wearing a long-sleeved hoodie in the 90-degree heat. The front featured an altered Masters logo; the outline of the United States, from which the pin flag sticks out in the spot that is roughly Georgia, had morphed into the form of a goat. The back listed the dates of Woods’ five Masters victories: 1997, 2001, 2002, 2005, 2019.

“The short-sleeved shirts haven’t arrived yet,” Ku said, shrugging. He also wore a baseball cap with the TW emblem and a tiger driver-head cover on his hand like a puppet. In his other hand he held a vinyl figurine of a miniature Woods. “This is probably the only opportunity I’ll ever have to see him,” said Ku, who explained why his respect for Woods, perhaps the sport’s all-time best performer, had recently grown into full-blown fandom.

“He seems to be having more fun,” said Ku, who also was moved by Woods’ embrace of his two children after his Masters victory in April. “He’s just a father now playing for his kids.”

By the time the event started, Ku’s unobstructed view of the stage had been spoiled by a phalanx of photographers. Ku’s vantage point was better Tuesday when he walked the course with Woods’ group and managed to stake out spots just behind the gallery ropes. Despite the cold, drizzly, windy weather, a crowd of several thousand turned out to watch Woods.

On a par-3 on the front nine, Woods was setting up to hit from off the green when a spectator standing behind him cried out, “We love you, Tiger.” Woods stopped what he was doing. “I love you, too,” he said. His words set off giggles from his besotted fans, whose rooting interest this week may be with the International team but whose hearts are clearly elsewhere. - NYT