Take Five: some of the biggest trophies in world sport

Eyes on the prize – here are some you could not miss 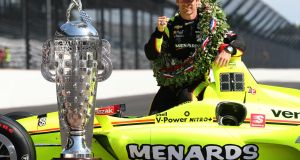 Awarded to the winner of the Indianapolis 500, the trophy – made of sterling silver – stands 1.63m tall and weights in at 69kg. The trophy body is hollow, with the bottom rim serving as its stand. The trophy has been presented to the winner of the speedway race every year since 1936, and is a large, multi-layered body of work which bears the likeness of every driver to have won the race since its inception in 1911. Also inscribed are the winner’s name, the year of victory and the average speed. On the top of the trophy is a naked man, in the tradition of ancient Greek athletes, but waving a checkered flag. The sheer size of the trophy means that whoever wins doesn’t actually walk away with it. Instead the winner is presented with a smaller replica, known as “Baby Borg.” The trophy gets its name from the Borg-Warner Automotive Company, who commissioned its creation in 1935 at a cost of $10,000. It is now ensured for in excess of $1.5 million.

It’s not the Champions Cup or the European League trophy for that matter, but – in terms of size – the Costa del Sol Trophy is one which has a rather large opinion of itself. It is the prize of a pre-season tournament hosted by Malaga CF in Spain, although it has managed to find its way into the hands of some famous footballers through the years. A hit-and-miss affair, the tournament – under the patronage of the Spanish Football Federation – was originally played in 1961 and was held every year up to 1980. Since then there have been a number of blank years when it failed to be held. Among those to have played in the event have included Pele, Eusebio and Johan Cruyff. However, a rather more infamous moment came when Tottenham Hotspur successfully defended in 1966 with a 1-0 win over Benfica. On being asked to receive the trophy, Spurs captain Jimmy Greaves exclaimed: “I’m not picking that thing up, I’ll kill myself.”

No, not the golf one. One of the newer trophies on the sporting scene, the President’s Cup was presented by US president Donald Trump to the winner of the Summer Grand Sumo tournament in Japan. The silver trophy – 1.37m in height and weighing 30kg – will be awarded to the winner of the sumo tournament held in May of each year. Trump himself presented the trophy to the inaugural winner Asanoyama, entering the sumo ring wearing slippers. He read from a victory scroll, “in honour of your outstanding achievement as sumo grand champion, I hereby award you the President’s Cup.”

Known in the international sailing community as the Auld Mug, the trophy – made of silver – is 69cm tall but extends to over 1.1m with the inclusion of the silver bases. Originally known as the Hundred Guinea Cup for its maiden race in 1851, it was renamed the America’s Cup after it was won by America, a 100-foot schooner from New Year City, in a race around the Isle of Wight. The America’s Cup is the oldest international sporting trophy and is due to be raced for again in 2021. The cup is always guarded while on display, and the silver trophy is never to be touched by bare hands. Whenever it travels it goes either business or first class in its own Louis Vuitton trunk, which was presented on the trophy’s 150th birthday in 1998.

The famed trophy is awarded to the winner of the National Hockey League in North America. It was commissioned by Lord Stanley of Preston who was the governor general of Canada and originally donated to Canada’s top-ranking amateur ice hockey team: the first name on its base is that of Montreal Hockey Club. Since 1947 it became the biggest prize in professional ice hockey and presented to the NHL champions, although it remains in ownership to its Canadian trustees. The original bowl was made of silver and measures 18.5cm in height. However the current trophy is topped with a copy of the original bowl, made of silver and nickel alloy, and has a height of 89.5cm and weights 15.5kg.