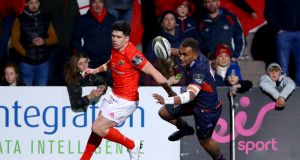 An understrength Munster side, having come from 10-0 down in the opening half, were unable to close out the deal when they hit the front in the third quarter and fell to a second defeat of the campaign in Cork on Friday night.

Munster faded in the final quarter as Edinburgh, close to full strength, recovered to secure the win and close the gap on their opponents at the top of Conference B.

It was a disappointing outcome for Munster but Johann van Graan’s coaching team will take a lot of encouragement from a lot of his youthful performers as they prepare for the back-to-back matches against Saracens over the next two weekends.

An inexperienced Munster side, with only Jack O’Donoghue retained from the starting 15 against Racing 92, could have done with a good start but found themselves 7-0 down after just three minutes.

They conceded a five-metre scrum when halfbacks Nick McCarthy and Ben Healy, making his first competitive start, failed to link up.

And Edinburgh made them pay dearly with experienced centre Matt Scott cutting a good line to touch down and outhalf Jaco van der Walt added the conversion.

Edinburgh might have increased their lead had their lineout not malfunctioned in a couple of promising positions as they pushed forward with a fully loaded side.

Healy got himself into the game with a good touch-finder from a penalty on the left but Munster knocked-on after the lineout and the chance was lost.

Edinburgh extended their lead when a scrum penalty resulted in Van der Walt splitting the posts from 35 metres to make it 10-0 after 22 minutes.

Healy, who suffered a bloody nose in the warm-up, got his account up and running when the Tipperary native made no mistake from a 25-metre penalty. It was a badly-needed score as they tried to stay in the game.

The score lifted them and it was all Munster from their to the break as they finally strung some quality attacking moves together.

A fine break initiated by centres Sammy Arnold and Dan Goggin led to a 23-phase assault on the Edinburgh line – noticeably the post-pads were lifted a couple of times as Munster drove towards them – which finally yielded a try via the television match official for Tommy O’Donnell after 36 minutes.

Healy slotted the conversion to make it 10-10 at the break, although Munster had a great chance to go in ahead when a penalty to the left corner yielded a great opportunity, but the Edinburgh defence was rock solid this time.

Munster hit the front two minutes after the restart as Healy confidently struck a penalty from over 40 metres on the right with a splendid kick from the former Glenstal Abbey captain.

However, Edinburgh countered and look set to regain the lead when hooker Stuart McInally put loosehead Pierre Schoeman away. The South African was denied, initially by a double tackle from O’Donoghue and Calvin Nash, and then from a driveback from Arnold and Shane Daly before the danger was averted.

Healy extended Munster’s lead after 53 minutes with a close-range penalty to push the gap out to six but that was cancelled at the other end when the experienced Simon Hickey tapped over a penalty shortly after coming on.

The winning score came after 63 minutes when Fijian winger Eroni Sau scored in the right corner after a perfectly weighted pass from his fullback Blair Kinghorn.

Hickey was unable to convert but Munster were starved of possession in the closing stages and Edinburgh held on.