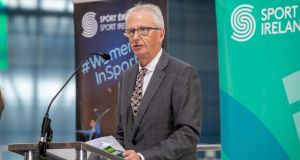 The substantial part of Monday’s unprecedented allocation of an €85 million Covid-19 Relief Fund to sport has been driven by this year’s commercial losses suffered by many of the Ireland’s national governing bodies (NGBs).

With the ‘big three’, Gaelic games , the IRFU and FAI taking the lion’s share of €31 million, €18 million and €13 million respectively, several other smaller sports are also set to be given millions of euro just to keep them in operation.

The funding, which is being allocated by Sport Ireland (SI), hopes to address the existential threat to the NGBs and their club networks, allowing them to off-set the losses incurred in recent months and add a semblance of certainty to planning for 2021.

“It turns out in a crisis like this that no one could have anticipated, the stronger the business model the bigger the hit,” explained SI director of high performance Paul McDermott.

“Cricket were able to demonstrate a very significant loss of income arising from having nothing able to operate over the summer. The international team competing generates a lot of income for them.

“Maybe certain sports outside the big three have bigger memberships. But cricket has a commercial business model. It’s running events, TV money, sponsorship money which relies on a high-profile national team competing at a level which is very visible globally.

“When people read this list of grants, it would read differently to a standard annual grant scheme because the circumstances are different.”

Cricket’s €1,498,500 allocation puts the sport fifth on the table behind the big three and golf, which was forced to close all clubs during the recent lockdown. Golf Ireland will receive €2,730,000.

Gymnastics Ireland, which has been recognised as having a very strong commercial aspect, is also high on the table and draws €1,380,000 from the pot, a significant amount given the profile of the sport. In Rhys McClenaghan, however, Ireland has one of the best pommel horse gymnasts in the world and the first Irish athlete to make a world final.

The Gaelic games family of sports including the Gaelic Athletic Association, Ladies Gaelic Football Association, Camogie Association and GAA Handball is funded as one for the purposes of club schemes and is by far the largest recipient.

“The GAA family themselves will decide on how that [€15 million] money is spent. It’s mainly to do with gate receipts,” said SI chief executive John Tracy. “The agreement is they would make that decision themselves.

“This is a huge investment. It's a recognition of the role that sport plays in Irish society. Never have we seen it more so. This funding came through in June. What Government were doing was ensuring sports organisations could continue to operate. They didn’t want any dismantling of any systems.

“They wanted to keep the systems that we have in Irish sport maintained. That’s one of the objectives of the scheme. We don’t want anyone ceasing to operate and that’s a big piece of what this scheme is about.”

The total amounts are broken into four different schemes with scheme one directed at the GAA, IRFU and FAI. Rugby’s allocation will go towards all aspects of the game including the four full-time professional provinces as well as the clubs. Funding provided to the FAI will include a ring-fenced amount to support clubs.

Scheme two is the National Governing Body Resilience Fund designed to support 20 NGBs and help offset losses with scheme three a Club Resilience Fund. This is directed to clubs that find themselves in need of assistance due to Covid-19.

SI will not fund clubs, affiliates, provinces or branches directly. This will be done through programmes established by each of the NGBs in receipt of funding. Scheme four is a Restart and Renewal Fund aimed at supporting over 1,600 clubs, dedicated funding for disability and older adults.

“The initial schemes announced in June were designed to support organisations with Covid-19 related losses in 2020. However, having engaged with our funded bodies, we understand that the current Level 5 restrictions present additional challenges,” said Treacy.

“The funding allocated by Sport Ireland today will protect the national sporting infrastructure and provide financial stability to the sector in the uncertain months ahead,” added Minister for Sport Catherine Martin.

* An Emergency Fund to the value of €5.8 million has also been established and separate payments of €2.5 million were awarded to local sports partnerships.